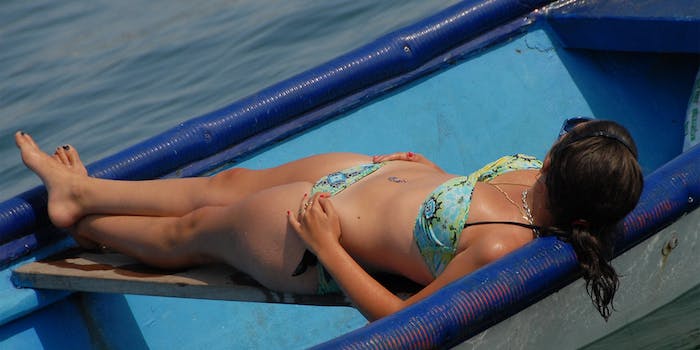 The teacher was trying to make a point about the importance of not posting private photos on social media.

Quick, what’s the best way to get kids to be more cautious about what they post on social media? I don’t know, but whatever it is, it’s not putting up a racy Facebook photo and showing it to more than 100 teachers and students at a school assembly, which is exactly what one U.K. teacher recently did.

According to the Mirror, a 15-year-old female student at Eggbuckland Community College in Plymouth, U.K., was humiliated after a teacher used a photo of her in a bikini from her Facebook page (not the one seen above) in a PowerPoint presentation during a school assembly.

The teacher was using the photo to prove a point about the dangers of posting sensitive private images on social media—an important lesson, to be sure. But the school did not obtain permission from the student in question before posting the photo at the assembly, leaving her in tears and her mother irate.

“They took the photo from her Facebook profile—she put it on there last year,” the student’s incensed mother, who did not want to identify her daughter by name, told the Mirror. “They used other photos of kids from the neck up but for some reason they thought it was OK to use a picture of my daughter in her bikini. Why did they have to use an image like that to make their point?”

The student’s mother also went on to say that her daughter’s self-esteem took a serious blow from the incident: “She’s not the type of girl who likes attention like this. She’s a tom-boy, she doesn’t wear make-up and she doesn’t even have her ears pierced. It’s not often you even get her in a bikini.”

Of course, it’s beside the point what “type of girl” the student is, or how often she wears makeup and provocative clothing; that’s no excuse for school authorities to shame her in front of her peers. That aside, the mother has issued a complaint to a national school watchdog organization.

But while the school’s headteacher has apologized for the incident on their website, the Plymouth City Council appears to be standing firmly by the school’s actions, issuing the following statement to the Daily Mail:

“It is very important that young people understand the risks of posting images and messages about themselves online. All our partner agencies, including all schools, have a duty to promote on-line safety and equip all pupils and students with the ability to stay safe online. Most images placed online on social networking sites or through the use of smartphones can be found and copied, and then shared.”

All of which is true, of course. But if you’re a 15-year-old girl putting up a vacation bikini photo on your Facebook page, you have every right not to expect it to be “found and copied, and then shared” by your teachers and school principal.