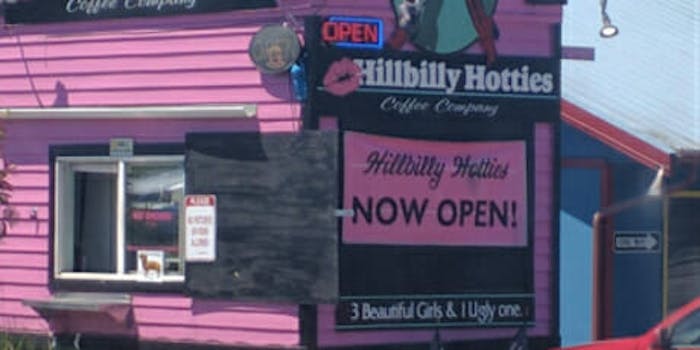 They claim it's freedom of expression—the city says it's propagating sex work.

The owner of Hillbilly Hotties coffee stands and seven bikini baristas filed a lawsuit Monday against the city of Everett, Washington, over the right to serve coffee in bikinis.

The suit comes in response to city council legislation, passed last month, that restricts the dress code of baristas working at quick-service establishments, prohibiting them from wearing bikinis to work. The plaintiffs claim that it is in their right to freedom of expression to able to bare skin while working at these stands.

In the Pacific Northwest, bikini barista stands are not an anomaly; according to the blog Bikini Baristas, there are 133 such establishments in Washington, Oregon, and Idaho alone.

The bill also said that these bikini baristas are dressing in a manner that is closely related with adult entertainment and they have negative secondary effects on the community as a whole and upon minors.

The new dress code regulations enforce that the breasts, stomach, back area below the shoulder blades, buttocks, top three inches of legs below the buttocks and pubic/genital areas must be covered by clothing that “fits adequately” and is not see-through. For many of Washington’s bikini barista stands, especially Hillbilly Hotties, this means employees cannot wear their typical bikini or G-string uniform to work.

The City of Everett said violations of this dress code can result in a fine of $250 and put the business on a probational license for up to five years.

In the suit filed this week against the City of Everett, the bikini baristas and owner of Hillbilly Hotties said the ordinances passed by the city deny the employees the ability to communicate through their clothing at work and are confusing and wrongfully targeting women, according to the Washington Post.

Jovanna Edge, owner of five Hillbilly Hotties stands in Washington, told the Post that the new city laws are unnecessary and several employees are threatening to quit because they’re not making any money with the new dress code requirement.

“Just like Starbucks with green aprons, UPS with brown trucks and outfits, and Hooter’s with short orange shorts, the baristas’ attire evokes a message at work,” the lawsuit said.

“This is not about the bikini,” said attorney Schuyler Lifschultz. “It’s about women’s rights and the U.S. Constitution. The City of Everett violated these women’s rights across the board.”

The Daily Dot reached out to a bikini barista employee at an Everett coffee stand but did not receive a response.