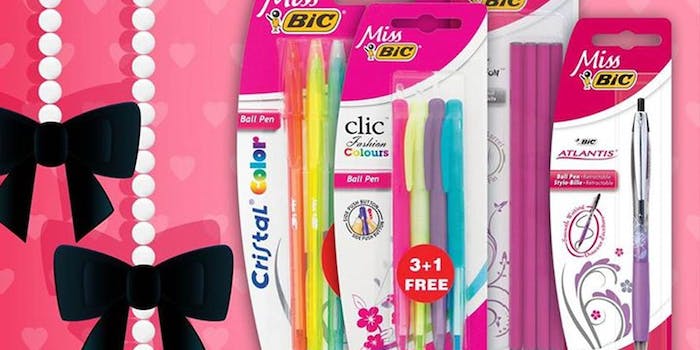 The pen company has offended women yet again. 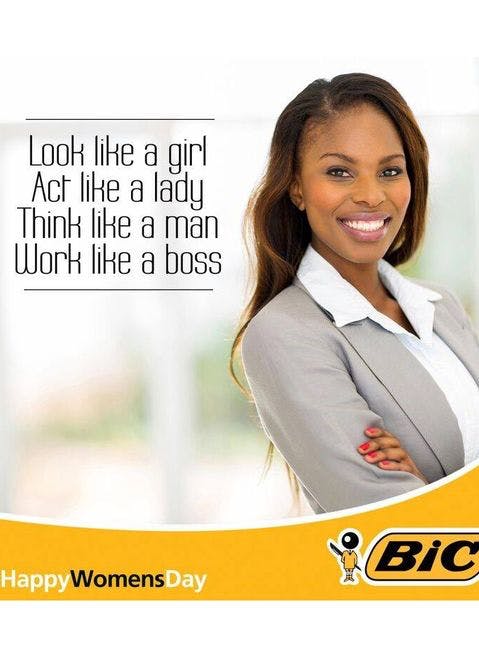 Bic took down the post, but not before commenters expressed their disgust with the image’s message.

According to the Sunday Times, one commenter on the now-removed post wrote, “Look like a girl? Because the infantilisation [sic] of women and the sexualisation of children is exactly the kind of blurred line we need! Act like a lady? Because narrow, straitjacket social scripts about ‘proper’ ladylike behaviour is precisely what emancipation was all about. Think like a man? Because women’s thoughts are not worth knowing. Work like a boss? Whatever the hell that means. Bic, you are literally ruining Women’s Day.”

Bic issued an apology in which it tried to justify the text on the image by saying it was from a women’s business blog.

Everybody relax. @Bic_SA was being sexist in an empowering way, and it's not sexism if you get it from a blog. pic.twitter.com/mcbPuEpI0F

This only further stoked the fire, forcing Bic to issue yet another apology to women and pen users.

Oddly, this isn’t the first time Bic has found itself in the throes of a sexist controversy. In 2012, Amazon customers noticed the Bic for Her pen line, a collection of pastel-hued writing utensils. Naturally, the reviews section turned into a social commentary message board.

“This is an awesome, groundbreaking product, but a quick warning for the ladies (and gents who may TRY to use one)!” one person wrote, according to Ad Age. “Practice extreme caution when using the new ‘Bic for Her’ pen. Word on the street is the ink has a heavy flow once a month and could stain. You’re welcome.”

Another commented, “I’m confused. I thought this would work like all the similar products I’ve bought in the past, but I keep urinating on it and it won’t turn pink *OR* blue!”

Unsurprisingly, Bic failed to learn all the applicable lessons from the backlash to its Women’s Day ad, as many of its products continue to be gendered.