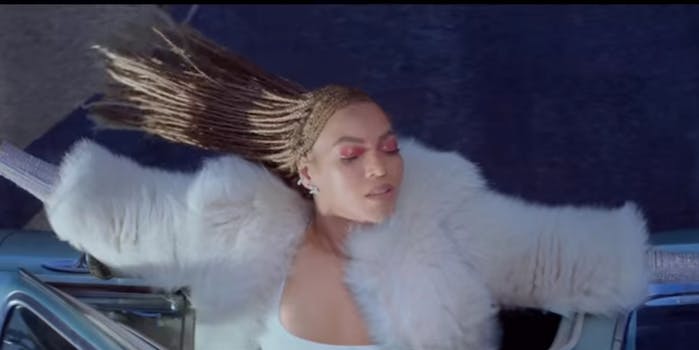 Vogue and Cosmo criticized for reactions to Beyoncé’s ‘Formation’ video

'If y'all actually had Black people on staff, then s**t like this wouldn't happen.'

Two days ago, Beyoncé broke the Internet with her brilliant new anthem, “Formation.” Since then, everyone with a blog or a Twitter account has shared their opinions about the video—and for every thoughtful analysis or observation, there have been several shockingly insensitive reactions, some from very high-profile sources.

Hours after “Formation” dropped on Saturday, Cosmopolitan tweeted a GIF of a beaming Blue Ivy standing proud in her mother’s video. But the text accompanying the tweet left much to be desired.

RT if Blue Ivy is your spirit animal pic.twitter.com/5LmpU7Iwua

“RT if Blue Ivy is your spirit animal,” tweeted the website, appropriating a spiritual concept sacred to many Native Americans in an awkward attempt to pay Beyoncé’s daughter a compliment.

Later in the evening, as the responses to “Formation” grew from 140 characters to longer and more careful critiques, Vogue chimed in with an analysis of its own—one focused entirely on Beyoncé’s hairstyles.

For all of her athletic prowess, it’s the hair that steals the show in Beyoncé's new #Formation music video: https://t.co/RrZ2Mlqpl0

“Piled in romantic tendrils, rolled into buns, and woven into every variation of braid, it illustrates near limitless range in a mere four minutes and 52 seconds,” wrote Vogue.com Beauty Editor Mackenzie Wagoner, adding that the declaration of freedom in “Formation” was “a siren call to grow out your hair if ever there was one.”

Criticism of the Vogue piece was swift, with people arguing that it reduced a video with powerful political messages about police violence against people of color and the devastation of Hurricane Katrina to an analysis of Beyoncé’s appearance. Others pointed out that the focus on the singer’s hair was even more troubling given the oppression that women of color often face due to racist attitudes toward natural hair and cultural hairstyles.

It didn’t take long for Black Twitter to call out Cosmopolitan and Vogue for their responses to “Formation.” Overall, the consensus was that the publications would fare better if they allowed writers of color to write about cultural touchstones in the black community.

@Cosmopolitan If y'all actually had Black people on staff, then shit like this wouldn't happen.

What white devil tweeted this? @Cosmopolitan

The message from Black Twitter was clear: when offering opinions about “Formation,” websites and magazines like Cosmopolitan and Vogue should prioritize the voices and thoughts of writers of color. And, given how many thoughtful essays have been written about “Formation” in the past two days, those writers will likely be easy to find.