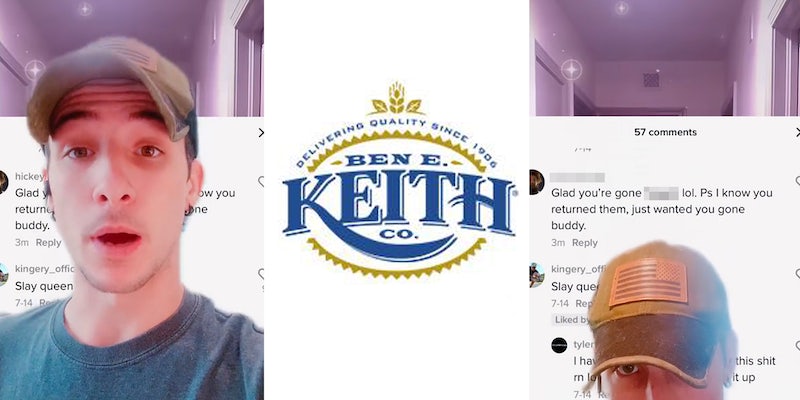 'I know you returned them, just wanted you gone buddy.'

Major American distributing company Ben E. Keith is under fire after an employee claimed to be wrongfully terminated, discriminated against, and accused of stealing paper bags.

In a viral video posted Aug. 23, user Tyler (@tylerthetitan2.0) addressed the situation as he spoke directly to the company while explaining why he has decided to take legal action.

He starts the video off by saying, “Hello Ben E. Keith. You know me. I was your employee that was just wrongfully terminated.”

Tyler claims Ben E. Keith fired him on the basis that he stole paper bags from the company, and had even broken into his car trunk to prove that he had them in his possession.

“So I contacted Ben E. Keith’s legal team to let them know what had happened, what had been said and all of the other slurs that I was called while working there because of my TikTok,” he says.

Even though Tyler claims to have a whole file of wrongdoings by the staff, he agreed to not sue as long as the company did the right thing. However, he says the company offered to pay him back for a dolly that he had purchased, but offered no severance pay.

His alleged manager, @hickeyswag on TikTok, left a comment on a previous video of Tyler’s where he’s dressed in drag to raise money for the Trevor Project, a non-profit organization that works toward suicide prevention for LGBTQ youth. Tyler claims this is not the first time he has been called this slur by his co-workers.

“You guys may have saw me as just this goofy little fucking dainty delivery driver that worked for you, but I keep everything,” Tyler says. “I document everything. I’m really fucking good at being a pack rat.”

Because of the homophobic management and how the situation was handled, Tyler has since proceeded to contact the Better Business Bureau and the Equal Employment Commission (EEOC), and encouraged Cane’s and Sonic to reassess the contracts they have with the company.

“All because you wanted to fuck with the wrong person,” he concludes. “You lose.”

In the comments section, users are appalled by Ben E. Keith Company and how they chose to handle the incident.

“The fact that the manager admitted you returned them and says they just wanted you gone…. not a good look my guy,” one user commented.

“Will be a mistake not to go after them. Don’t make that mistake,” another said.

“Brotha I’m really proud of you,” a third user shared.

In an additional comment by Tyler in the comments section, he updated his followers.

“For all asking, legal action is being taken. I have spoken with an attorney. I will update as I can with what I can.”

The Daily Dot reached out to Tyler via Instagram DM and Ben E. Keith Company via email.