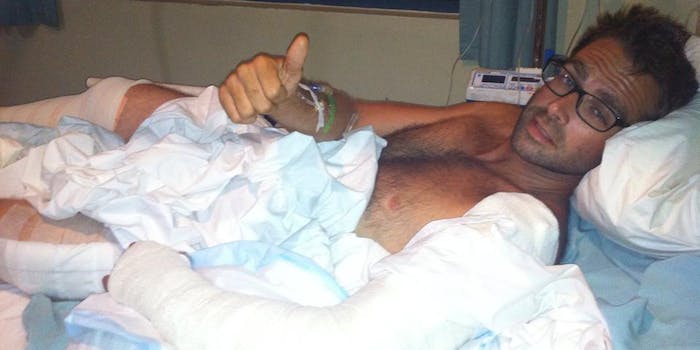 Facebook rallies to foot the bill for injured skydiver

Ben Cornick is an experienced skydiver, with 2,500 jumps under his belt, but an equipment malfunction landed him a broken arm, leg, and hip.

Cornick, 31, an instructor at Skydive Fiji, was doing a “fun jump” on Jan. 14 when the riser slipped out of his hand, causing Cornick to go off-track and land on a parked van. “This slowed the turn down and took him off course slightly,” Cornick’s cousin and fellow skydiving instructor Ryan Davies told ABCnews.com. “This happens from time to time, and it’s not an issue, but there was a van parked in the middle of the landing area, and Ben didn’t have time to change course and avoid the van.”

Cornick suffered a broken right femur in three places, a broken left arm, and a broken hip. While he has insurance coverage for injury while on the job, he must pay for his own bills since the jump was performed on his own time.

Davies, who grew up with Cornick in Swansea, Wales, created a Facebook page to help raise money for Cornick.

Donations and words of encouragement were not limited to fellow skydivers, as Cornick received support from people around the world. “I didn’t expect the phenomenal response we’ve had from the sky diving fraternity, family, friends and even people we’ve never met,” Cornick’s mother, Ellie Harrison, told Wales Online.

Within 16 hours, users donated $50,000, enough money for the emergency helicopter flight from Fiji to New Zealand to a hospital capable of performing the surgeries Cornick needed. Had a few more days passed, there would have been a high risk of infection in Cornick’s leg that may have required amputation.

Cornick is expected to be in the hospital for a few more weeks, and it could be more than year before he skydives again, Davies said. Prior to the accident, Cornick had performed more than 2,500 jumps.

Davies said yesterday that the family has met their fundraising goals.

Cornick had been in Fiji since October and planned to return to Wales in time for his son’s first birthday on March 24.

“We are still going to try to get him home by then,” Davies said.