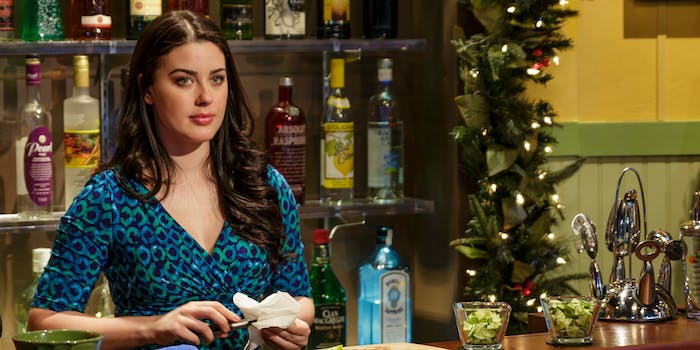 It's a common misconception, but a hard 'hell nope.'

Any woman who has worked in the food service industry has her fair share of stories of men—customers and coworkers alike—harassing her. Whether it be asking for a number or touching a little too long when passing by, men somehow push these restaurant and workplace boundaries. Perhaps it’s because they’ve already categorized you as there to serve and entertain their every whim (hooray!). Or perhaps it’s because they mistake common customer service skills, like being warm and accommodating, for actual attraction.

It’s a customer service catch-22: The nicer you act, the better you do your job—but also the higher the chance your behavior is misconstrued as something more. The colder you are to avoid these come-ons, the worse you appear at your job and the more likely you’ll get skimped on the tip for poor service, maybe even be complained about to a manager.

One bar in Exeter, England, however, has nipped this conundrum in the bud by putting up a simple sign reminding patrons that their bartender isn’t “uncontrollably sexually attracted” to them—she’s just doing her fucking job.

The sign, an extremely simple pie chart, is labeled, “Why the female cashier is being nice to you.” In the legend, the color white is labeled, “She is uncontrollably sexually attracted to you,” while the color black reads, “Because that’s literally her fucking job you cretin.” The kicker: The pie chart is colored in all black.

“… If dudes could stop trying to kiss our female bartender’s hands that would be great,” an image of the sign posted to Twitter reads.

This is definitely our favourite sign in the bar. Also if dudes could stop trying to kiss our female bartender's hands that would be great. pic.twitter.com/C1Lf8KNe1Q

The bar, the Beer Cellar, put up the sign after a female staff member was harassed by male customers, according to Mashable. According to Lauren Dew, a bartender at the location, the sign’s been a funny way for them to tell male patrons to check themselves before they wreck themselves.

“We basically just printed it out after we had a very sex-pest heavy weekend about three months ago,” Dew said. “People really laugh, people support it. One percent think it’s a bit offensive, which is funny to me because those are the people it’s aimed at.”

The chart itself is credited to illustrator Charlotte Mullin, who was inspired by her years working in retail. Mullin echoed the customer service catch to Mashable, saying that in retail, workers are pressured to give strong customer service that, unfortunately, can be misinterpreted as romantic customer interest.

“I wanted to make it clear that female staff are nice to you because they have to be!” Mullin said. “And, of course, most of us are decent human beings and would be nice to you anyway, but in no way does this mean we’re dying for your dick.”

Now if only we could fast-forward to the year when these signs would no longer be necessary—but, until then, this will do.