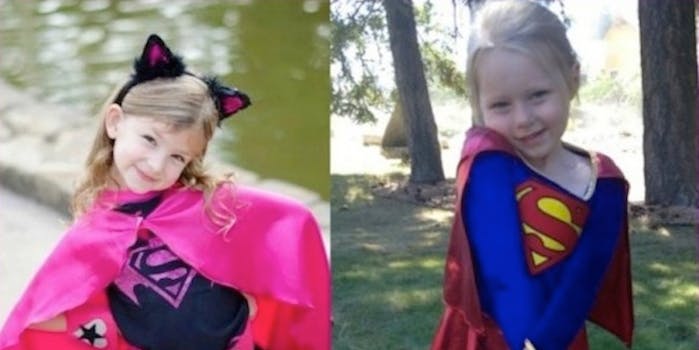 So say we all.

Savannah Greenawalt and Seattle Lennox are two 5-year-olds struggling with incurable, rare, life-threatening diseases. They’ve never met, but now their inspiring stories are touching hearts around the world, thanks to a social media campaign championed by the cast of science-fiction TV show Battlestar Galactica.

The connection began when Savannah’s mother, Amber, a huge fan of the show, met Canadian actress Leah Cairns at a Battlestar Galactica (BSG) convention in May and shared her daughter’s story.

“She told me about her daughter’s struggle with mitochondrial disease, and it really struck a chord with me as her story mirrored the journey my sister and niece have been on since my niece became ill with Transverse Myelitis” said Cairns who played Margaret Edmonson, also known as Racetrack, on the series. “By the end of her story, we were both in tears, and I knew that this woman and I would become friends for life.”

Both girls have shared similar struggles during their young lives. Savannah’s cellular energy disorder keeps her body from converting food and oxygen into energy; many children with the condition rarely reach their teen years. That hasn’t keep her from dreaming of a future though, and Amber has encouraged those dreams by introducing her daughter to powerful female characters from TV including Kara Thrace and Laura Roslin from BSG. Seattle’s neurological condition was caused by inflammation of her spinal cord, and her family was told that if she survived, she’d never walk again. Seattle has since beaten the odds and taught herself how to walk for a second time. She even dances, but still sometimes needs a wheelchair and leg braces.

Cairns decided to start a GoFundMe campaign to help both families pay for much-needed therapies and expenses—like a portable oxygen tank for Savannah and a new wheelchair for Seattle—that the parents were struggling to afford.

To spread the word, Cairns sent an email to her fellow Battlestar Galactica cast members. Actor Edward James Olmos, who played Admiral William Adama, and many of the others quickly responded by sharing the campaign on Twitter and Facebook.

“All over the world there are families in need, and when things like this happen you have to try to reach out and help,” Olmos told the Daily Dot.

The Battle for Savannah and Seattle. https://t.co/QzStgRGB8D via @gofundme we need the fleet in on this SO SAY WE ALL! Join me!

@AmberGreenawalt I’m so looking forward to meeting you Savannah and Seattle &… I hope you have a Blessed Holiday Season, Amber. Love MM

Olmos said he’s received a great response from his followers, who are joining in to help the campaign reach its $20,000 goal. So far they’ve raised over $10,000.

While spreading the word about the fundraiser, the cast is also trying to share the girls’ story with comedian Ellen DeGeneres in the hopes of having them meet for the first time on her daytime talk show. Olmos said it would be a good program for the girls to meet on because DeGeneres is so in tune with these kinds of situations and helping people—plus, she’s another strong woman that the girls would benefit from meeting.

Cairns said an appearance would also be a perfect opportunity to educate people about these rare diseases. Most of all though she thinks it would be great for these two girls to have the chance to meet, since they live so far apart. Savannah lives in North Carolina while Seattle lives in British Columbia.

“Savannah refers to Seattle as her best friend yet they have never met! These girls need to meet … if only to know that they aren’t alone in this world,” she said.

Dear #BSG fans! The #BSGCast is asking for a favor! Would u pls retweet this for us? @TheEllenShow Pls #UniteSavannahAndSeattle on ur show!

Please everyone lets help #Savannah&Seattle We can reach this goal so easily! https://t.co/R8Oh5JbBZO This is what I want for Christmas! Xo

Please help if you can, Leah Kairn’s niece & another little girl with rare diseases and unable to pay for proper med. https://t.co/gOozuWtLSx

There’s been no comment from DeGeneres or her show regarding the girls’ campaign yet, but the cast of Battlestar Galactica will continue to spread the word. The show celebrated its 10th anniversary this year, and Olmos said the whole cast is still pretty close and that they all try to get together at least once a year. Seeing how they’ve come together to change the lives of these two little girls, it’s clear they still share a bond.

“I think it speaks volumes about how truly wonderful the BSG family is. We always say that we worked with the best people in the world, and we mean it. To have had the opportunity to work with these beautiful, selfless, caring people, is an experience I will always cherish,” Cairns said.

Olmos hopes healthy people with healthy families will look beyond themselves and help others like Savannah and Seattle.

“I hope people understand there are a lot of kids in need, and any time they can help one of these families and their campaigns it’s excellent and they should help where they can,” he said. “It really makes you feel in balance. The more you give, the more you’ll be in balance with the world itself.”

Photo via The Battle for Savannah and Seattle/GoFundMe