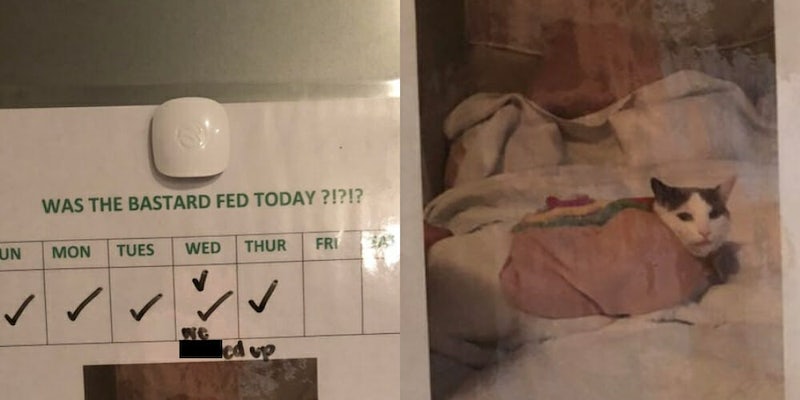 This bastard cat tricked entire household into overfeeding him

Cats are manipulative sons of bitches that know no bounds when it comes to getting what they want, be it to lay atop your laptop keyboard as you’re working, or being fed despite already having a brim-filled bowl. It is up to the cat owner to have a will stronger than that of a 12-pound furry mammal with claws. And yet, we are somehow, so much more often, weaker than our pets.

Just take 20-year-old Emily Koziel, a Michigan State University student who, along with her three roommates, got played into feeding him multiple times a day, just because he was super convincing in his one-cat production of “I HAVE NOT BEEN FED TODAY I SWEAR TO GOD YOU’LL LEAVE ME TO STARVE WITHOUT MY HALF TIN OF WET SLOP.”

According to BuzzFeed News, Koziel learned that her cat Otto had been tricking the entire household into feeding him all the damn time just by learning their sleeping schedules and bothering the heck out of them. As someone with an asshole cat that does the running man with his front paws on closed doors, I understand her pain.

“He usually wakes us up by meowing really loud—we describe it as a scream. His meow is not pretty,” Koziel told the publication. “Then he licks our doors, and if that doesn’t work he has figured out to open the door.”

One morning, Koziel explained, she had fed Otto half a can of cat food, then put the remaining can in the fridge before class. When she came home later that day, she found a different half of canned food sitting in the fridge. That’s when she found out that Shelby, on of her roommates, fed him because he “yelled at her” (!!!!!) to be fed when she woke up.

“I swear he knows our sleeping schedule,” she told the publication.

So, Koziel decided to take Otto’s bad habits into her own hands. She made a laminated feeding chart titled, “WAS THE BASTARD FED TODAY ?!?!?” complete with a photo of the bastard, Otto, in a burrito costume. On Reddit last week, Koziel shared an image of the feeding chart stuck to the fridge with a magnet, showing that each day Otto is fed, someone will check the box of the appropriate day of the week.

“Our cat had all four roommates feeding him each day because he acted like he was starving and we didn’t know that the other roommate already fed him,” Koziel’s caption read. “This was our solution, hopefully he will slim down a bit.”

Despite Koziel’s best intentions, however, it appeared that la Casa de Otto already fucked up—two people fed him on Wednesday, despite the chart’s clear indication that Otto not be fed multiple times. For the record, Koziel stated on Reddit that Otto gets this one half a can as his special meal, but gets to snack on a bowl of cat kibble throughout the day.

Our cat had all four roommates feeding him each day because he acted like he was starving and we didn’t know that the other roommate already fed him. This was our solution, hopefully he will slim down a bit. from funny

Regardless of Koziel and her roommate’s Wednesday failings to feed Otto but once, the people of subreddit r/funny still took pleasure in the bastard’s feeding chart, suggesting that Otto was too smart for this simple feed tracking system.

“Next post – ‘My cat learned to erase dry erase marker!'” one commenter wrote.

“Next post- ‘my cat has evolved to the point where all human civilization is threatened and we have no chance against the OH LAWD HE COMIN,'” another chimed in.

The chart, also shared to Twitter, allowed other cat owners to commiserate in the pain of having a cat that has learned all the ways in which it can push you to the edge of feeding it multiple times a day just to stop its vocal protestations.

“The reactions have been lots of laughs and super funny comments. My favorite one was that he will learn how to erase the check marks,” Koziel told BuzzFeed News.

For all we know, however, that was really Otto in disguise, posing as Koziel to dissuade invested posters from following his subsequent weight-loss journey.