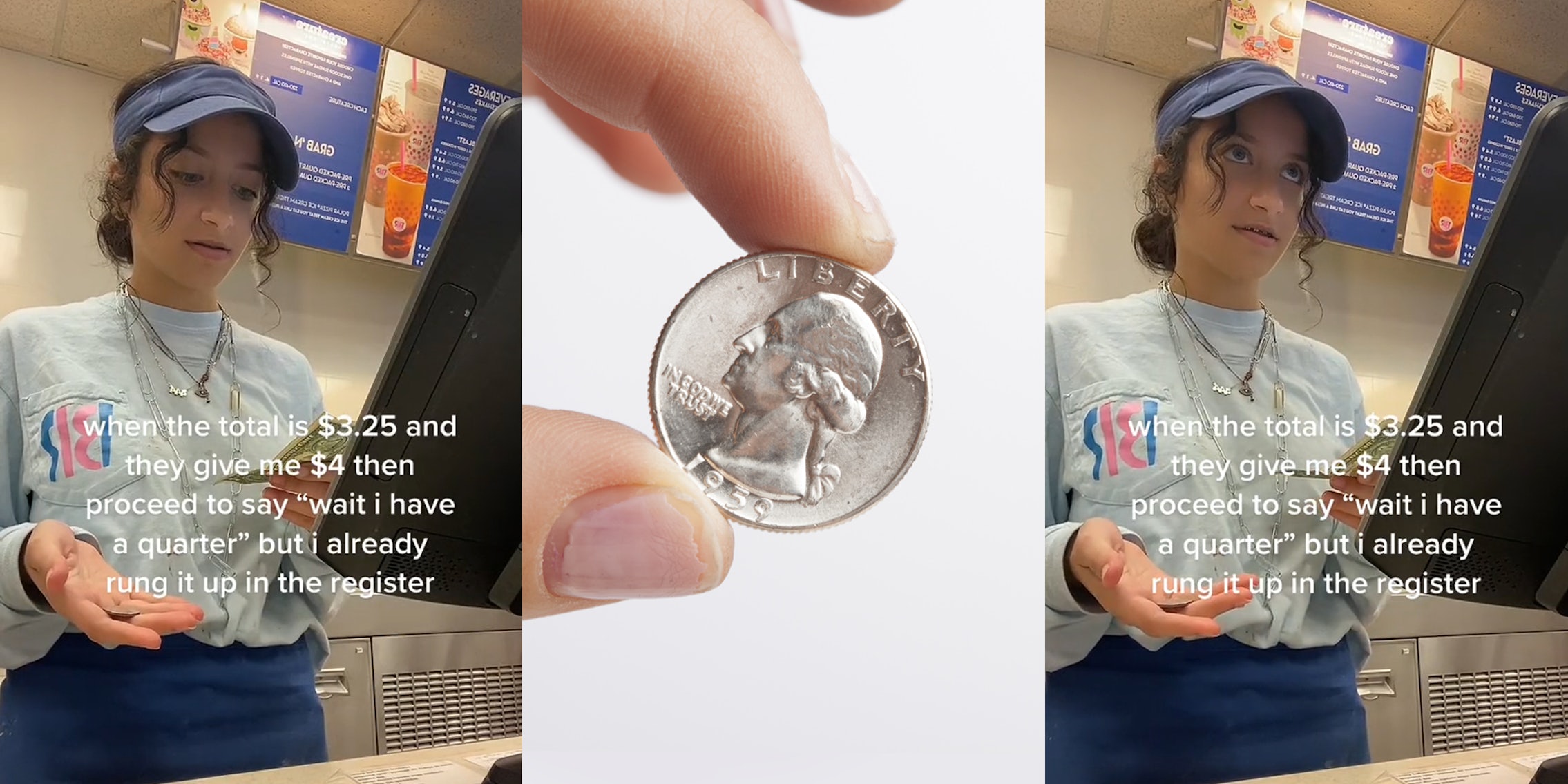 ‘They act like we have a reverse time button on the damn register’: Baskin Robbins worker shares customer pet peeve

'Old people be doin this just for fun.'

A Baskin Robbins employee shared a pet peeve they have with customers at the check-out counter.

The video was uploaded by TikToker Maya (@soapyramennoodels) and was viewed 6.7 million times.

Maya wrote in a text overlay: “When the total is $3.25 and they give me $4 then proceed to say ‘wait i have a quarter’ but i already rung it up on the register.”

Maya captioned the video: “My brain just shuts down at that point”

Many TikTokers criticized Maya for not quickly realizing she just needs to hand the customer a $1, instead of the 75 cents she was originally going to hand over.

However, others said that it sometimes takes them a minute to compute what’s going on as it breaks up the rhythm of their workflow.

“All math ive ever learned leaves my brain at this moment,” one said.

Others said that before getting their cashier jobs, they practiced on-the-fly calculations to ensure that their computation skills were up to snuff. “I remember when I had my first cashier job. My mom and I prepared the whole night bc I’m so bad at math,” one recalled.

Things became even more complicated in the comments section, however, when someone tried to argue there would be a monetary discrepancy in the register since the worker was putting $4.25 in it as opposed to the $4.00 they originally keyed in. However, as many other TikTokers pointed out, the amount in the register would remain unchanged since the customer handed them over a quarter.

Other TikTokers began sharing their own transactional gripes with customers in the comments section of the video, stating how frustrating it is when customers tell them they have a discount code/coupon, but only after they’ve begun processing their transaction.

“When they ask if they have discounts to use after the transaction went through,” one said.

“They act like we have a reverse time button on the damn register,” another wrote.

The business of receiving and processing cash in businesses is one that’s been analyzed closely. Teller Mate states that 9% of all cash handled in a business is ultimately lost, i.e. nine cents on the dollar “Out of every dollar taken in, nine cents are being spent to receive, count, safeguard, transport, and deposit cash. Because of this, addressing cash loss is seen as a strategic priority for most businesses within the next twelve months,” Teller Mate reported.

Fast Casual dug deep into the reasons why registers at particular businesses could be experiencing cash loss, and it ranges from the confusion that can arise from voided and refunded transactions to customers intentionally attempting to obfuscate employees in the hopes of walking away with some money out of the situation.

The Daily Dot has reached out to Maya via TikTok comment and Baskin Robbins via email for further information.