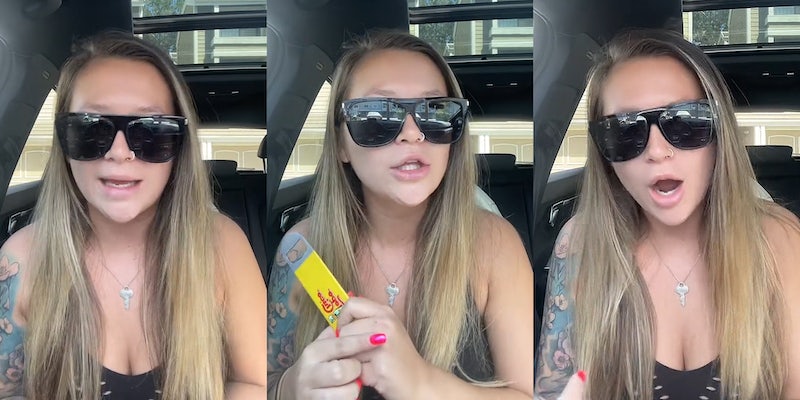 ‘NEVER ASSUME a woman is going to not tip’: Bartender tells male customers to not let their girlfriend sign bar tab, sparking debate

An Orange County bartender has gone viral after sharing what she considers proper “bar etiquette.”

“The amount of insanity I see at my job, you guys clearly need a crash course in fucking everything,” TikTok user Kayla Maher (@kaylanmaher) explains.

While some of her tips seem like common sense—she advises to not buy top-shelf liquor unless you’re ready to pay top-shelf prices, to not try to ask the bartender out after they reject you, and to not flail around to get the bartender’s attention—the point that starts the video has drawn the ire of some people on TikTok.

“If you are coming up to a bar, men, and you’re paying, don’t let your fucking girlfriend sign for the fucking bill, OK?” she says. “She’s gonna leave me three fucking dollars on a $150 tab that you just fucking ordered!”

@kaylanmaher Laying some bar etiquette on you. This is all for jokes (kinda)💕 #fyp #foryoupage #bartender #WorldPrincessWeek #AEJeansSoundOn ♬ original sound – Kayla Maher

In the comments, some users supported Maher’s initial advice.

“The girlfriend thing!” wrote one user. “It can be so true… it’s a real 50/50. Either they overly tip for you or leave you close to nothing there’s no in between.”

“This is very true but I’m the girlfriend that will tip you extra just because I know how it is,” shared another.

“You’re right tho with the first one sometimes,” noted a third. “I myself over tip always, but I’ve experienced women tipping looowwwwwww.”

“I was a waitress/bartender for 10 years – women ALWAYS leave shit tips when they sign for their man!!!!!” alleged a fourth.

However, some took the opposite position.

“U lost me on the first one,” a commenter offered. “I always sign when a guy is buying my drinks for the sole purpose to overtip.”

“From my personal experience, the man leaves NO tip so I ALWAYS signed the bill,” a second stated.

“I definitely wouldn’t assume that from all the ladies,” another claimed. “I tip better than most men ever have.”

The actual data on tipping is a bit scattered. While a report from CreditCards.com in 2019 grabbed headlines by claiming that “men and millennials (those aged 23-38) are the least likely to tip for the services they use,” per Yahoo! News, the data is a bit more nuanced than the main takeaways would imply.

First, while men and millennials were less likely to tip in general, the study notes that this is in part due to inconsistent tipping behavior. For example, millennials are more likely to tip baristas than their baby boomer counterparts; in contrast, only 15 percent of millennials always tip hotel housekeepers.

Furthermore, “though men and millennials are the most reluctant tippers, they can be the most generous,” notes the article.

“More men than women will tip over 20% while nearly a quarter of millennials are willing to tip more than 20% on the bill. That’s compared to only 5% of baby boomers,” writer Kristin Myers explains.

In a follow-up video, Maher explains that she knows that not all women are bad tippers; she was simply pointing out a trend she observed on the job in Orange County.

“It’s localized to my area, and it’s something I deal with quite often,” she says.

In this video, she says that there are practical reasons the person paying should sign the check. First, the cardholder needs to know the total so they aren’t surprised when they get a credit card statement.

Next, she says that the issue can sometimes boil down to the fact that women will come to the bar, order a lot of items, and upon seeing the total, realize that they have spent more than they expected. This results in a lower tip.

“The video was not supposed to be mean or malicious or anything like that. It was more just like a rant,” Maher states. To those who disagreed and said that women should not be assumed to be bad tippers, Maher emphatically agrees.

“I do understand what you’re saying, and you are right,” she says.

Still, some users were simply frustrated by the idea that they were expected to tip by default.

As one user wrote, “I understand the principle here and I’ve worked service industry but WHY is it that now things are just expected? Tips are based on service.”

The Daily Dot has reached out to Maher via Instagram direct message.