After 55 years, Barbie gets a body-positive makeover

The times are changing, and so is Barbie.

Barbie is getting a makeover, but she’s not just getting a haircut or a new wardrobe. This time, she’s getting a new body—more specifically, three new bodies.

Mattel, the toy company behind the iconic doll, announced on Thursday that after more than half a century, it will give Barbie the body-positive revamp that people had been calling for for years. The once strictly blonde, disproportionate doll will now be produced as tall, curvy and petite, with a variety of skintones, hairstyles and outfits.

Barbie has already taken on new media, with an Instagram account that boasts 1.2 million followers. But she’s back to old media with a TIME magazine cover story revealing her new body types have been in the works for two years under a top-secret project: “Project Dawn.”

In the official announcement, Richard Dickson, President and Chief Operating Officer of Mattel, says that Barbie is changing with the times:

For some, however, Barbie has not evolved quickly enough. Lego surpassed Mattel as the biggest toy company in the world in 2014, and Hasbro won the Disney Princess business away from Mattel: two major blows in a short stretch. It’s what Evelyn Mazzocco, General Manager at Barbie, now calls “softness in sales.” And in that same year, Kim Culmone, Barbie’s lead designer, was singing a completely different tune. From Fast Co. Design:

Would you ever release a Barbie that was a more realistic proportion? Or could that not be a Barbie because the fashion wouldn’t be the same on her?

It would depend on the objective. So to me, there isn’t an objective to change the proportion of Barbie currently. And to little girls, they are putting themselves in that doll anyway. You have to remember that girls’ perceptions are so different than grown ups’ perceptions about what real is and what real isn’t, and what the influences are.

But no sooner did she say “Barbie’s body was never designed to be realistic” did the team start dreaming up the seven skin tones, 22 eye colors, 24 hairstyles and textures that will make up the new Barbies, available now online. Original Barbie is also still available. 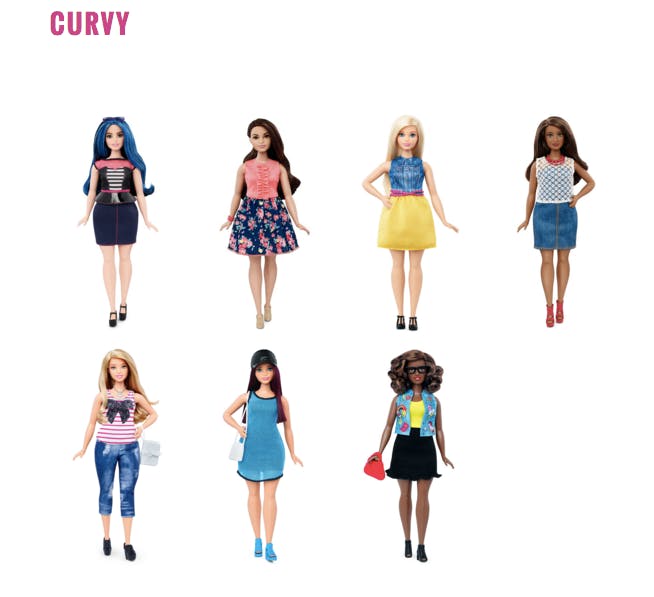 The company says it recognized that millennial moms are concerned about what toys in their household “signify,” and that with celebrities like Kim Kardashian, Beyonce and Christina Hendricks setting new standards for beauty, it only made sense for Barbie to follow suit.

“We’re in a position of progress, not perfection right now,” Jess Weiner, Social Messaging Strategist at Mattel, says in a video for TIME. “And that’s okay.”