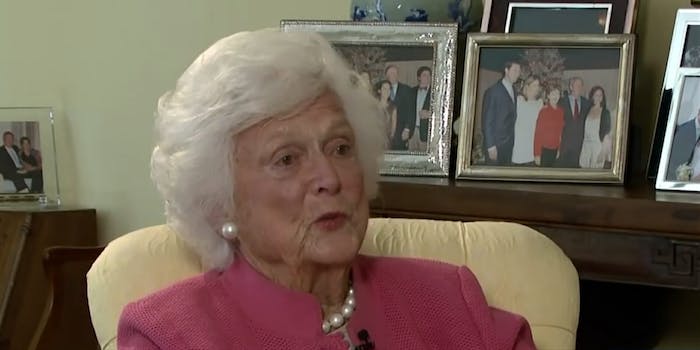 Bush wasn't much of a feminist herself.

Former First Lady Barbara Bush passed away on Tuesday at age 92. But not everyone is feeling that the woman who once said that Katrina victims were better off in shelters because they “were underprivileged anyway” is deserving of a glowing tribute.

This was never more clear after the Women’s March tweeted “Rest in peace and power, Barbara Bush,” along with an image of Bush raising her hands and smiling. By Wednesday morning, over 10,000 Twitter users had liked the post, and at least 1,000 retweeted it. But a vast majority of comments were along the lines of “wtf Women’s March.”

Feminists quickly pointed that Bush wasn’t much of a feminist activist herself, instead criticizing women’s rights groups after Anita Hill said Supreme Court Justice Clarence Thomas sexually harassed her. Others argued that she enabled the Gulf War during the early 1990s and encouraged Americans not to think too critically of the War in Iraq, enabling the deaths of innocent people of color in the Middle East.

“But why should we hear about body bags, and deaths, and how many, what day it’s gonna happen, and how many this or what do you suppose?” Bush said to Diane Sawyer, criticizing speculation during the coming days before the War in Iraq, Snopes confirmed. “Or, I mean, it’s, it’s not relevant. So, why should I waste my beautiful mind on something like that?”

"But why should we hear about body bags, and deaths, and how many, what day it’s gonna happen, and how many this or what do you suppose? Or, I mean, it’s, it’s not relevant. So, why should I waste my beautiful mind on something like that?"

This is so so disappointing. The things she and her family have down to global Black people is criminal, to say the least. She is part of the system of white supremacy, anti Black, anti feminist, as Malcolm said “who taught you to hate yourself?”

This whitewashed nonsense is what happens when you let your movement be taken over by corporate foundations, the Democratic Party, and neoliberals who make the name of a protest a brand and then attack activists who organize other protests with that namehttps://t.co/RGaW49zURT

Plus, it’s one thing to commemorate Bush’s life, and it’s another to say “rest in power.” The latter has political implications and implies the Women’s March is aligned with Bush’s beliefs.

People are calling on the Women’s March to simply delete the tweet and apologize.

Even when the organization is inclusive for the right reasons, it rarely escapes the ire of the internet. Just last week, the Women’s March found itself under siege by sex-worker exclusionary feminists after the account tweeted its support for sex workers.