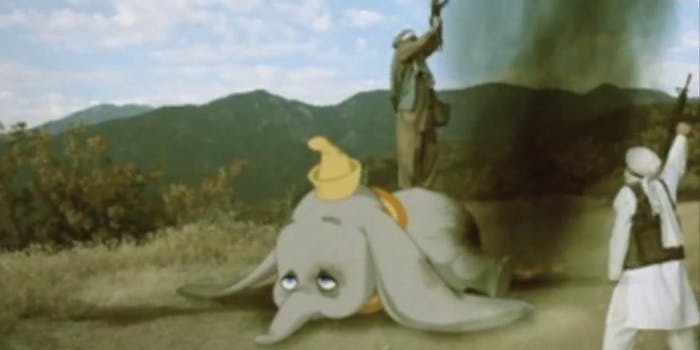 Rebels shout "Allahu Akbar!" as they shoot down ... a beloved Disney character?! What does it mean?

While street artist Banksy has put down his stencils and spray cans on this day of rest, that hasn’t stopped the mysterious Brit from stirring up some controversy.

“I’m not posting any pictures today,” Banksy stated on his website. “Not after this shocking footage has emerged.”

The footage shows a group of Middle Eastern rebels shooting an RPG at something they see flying off in the distance. Upon landing a direct hit, the rebels receive a depressing Disney surprise.

The video featuring Dumbo is part of Banksy’s month-long art experiment on the streets of New York. Gothamist reports that the video “could be a reference to the neighborhood DUMBO—perhaps his latest piece is already there waiting to be discovered, or maybe the waterfall truck will be there later tonight.” Some Reddit users, on the other hand, believe there’s a deeper meaning to the 90-second long clip.

“I think it’s giving a view of war from the eyes of the child,” guitarjt commented. “The adults cheer because they are victorious. They feel victorious for ideological reasons… The child doesn’t have these ideas and only sees that the adults killed something beautiful.. So she goes over and kicks the guy as to say ‘great work you fucking doofus.’”