The Atlanta worker posted that 'n**gers' should 'go back to Africa.'

A Bank of America employee’s viciously racist Facebook post is just the latest in a string of discrimination complaints directed at the bank.

Christine McMullen Lindgren, who worked at one of the company’s Atlanta branches, posted a vile series of racist epithets on her Facebook page, suggesting that “f***ing n**gers” should “go back to Africa” and implying that all black Americans were on welfare. Lindgren subsequently deleted the posts and her entire profile. 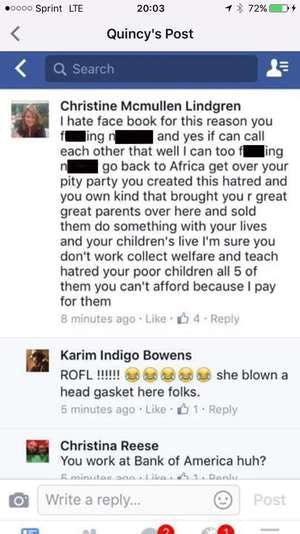 By late afternoon, Bank of America had received thousands of calls and messages about Lindgren, who listed her job on her profile. The company quickly fired her and announced her termination on both Twitter and Facebook.

But the company’s rapid response was too little, too late for its most vocal critics.

Some people commented on the post announcing Lindgren’s termination with questions about whether her prior caseload—and especially her record of issuing loans to black clients—would be examined. Others demanded a full apology to black customers and the community at large. One person even suggested that the bank’s roots were less than honorable.

@BankofAmerica aren't you tired of being one of the faces of racism?

Bank of America has a reputation for discriminating against black employees. In 2013, the Department of Labor ordered the company to pay more than $2 million to 1,147 black job-seekers who were unfairly denied entry-level positions. Those denials happened at just one of the bank’s locations, in Charlotte, North Carolina.

The same year, Bank of America had to pay $39 million in a gender discrimination lawsuit brought by female employees.

In 2014, the National Fair Housing Alliance accused the bank of discriminating against black and Latino homeowners in Cleveland, Ohio.

The largest and most revealing racism lawsuit against Bank of America was settled in 2013, when the company paid $130 million to a class-action group of employees who said they watched for decades as the company steered black employees into low-level positions and even reassigned their caseloads to white employees.

That lawsuit also highlighted the fact that Bank of America had violated the consent decree it signed with the Equal Employment Opportunity Commission in which it promised to increase the black proportion of its workforce from 2 percent to 6.5 percent.