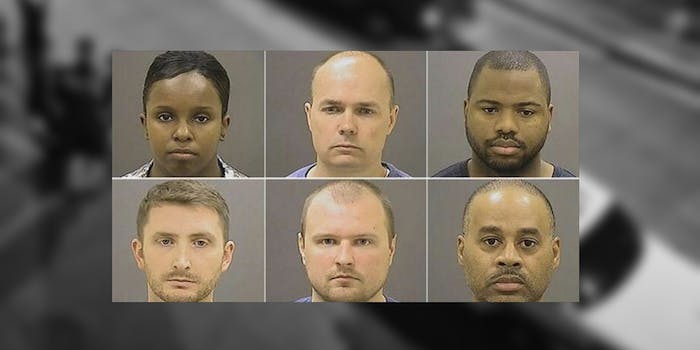 Baltimore court records show that the bail amount set for the six officers charged in the death of Freddie Gray was lower than the amount for a black teenager charged with smashing a car window during a riot.

Allen Bullock turned himself in to authorities on Thursday following the advice of his stepfather, who was allegedly concerned the police would track him down and “beat him.” The 18-year-old was seen in a photograph smashing a police car window with a traffic cone.

Bullock faces eight misdemeanors and his bond was set at $500,000, an amount the family says it could never afford.

Bail was set significantly lower for the six officers who were indicted Friday on charges ranging from false imprisonment to second degree murder. A judge set bail for Officer Caeser R. Goodson Jr., the driver of the van in which Gray’s fatal injuries occurred, at $350,000, according to court records. Three of the officers were reportedly able to bond out at $250,000.

Maurice Hawkins, Bullock’s stepfather, told the Guardian on Wednesday that his stepson recognized what he did was wrong, and that the judge was trying to make an example of his stepson.

“If they let him go he could at least save some money and pay them back for the damage he did,” Bullock’s mother, Bobbi Smallwood, told the Guardian.

Bullock’s public defender called the disparity between her client’s bail and that of the police officers “outrageous,” according to Jon Swaine, the reporter who interviewed his family.

An Indiegogo campaign to help Bullock’s family afford the bail raised more than $1,800 on the first day. The authenticity of the fundraiser could not be immediately verified by the Daily Dot.