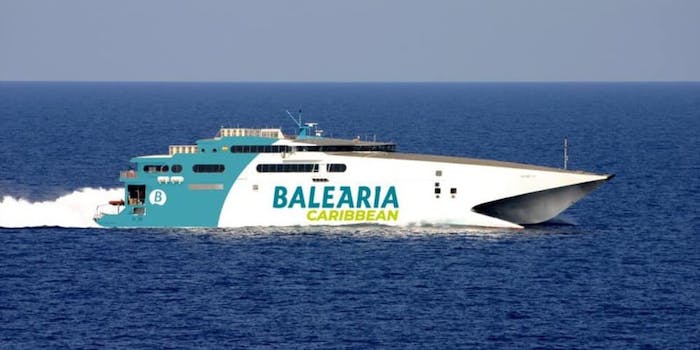 Video shows Bahamians without visas made to leave boat coming to the U.S. (updated)

A video by Miami journalist Brian Entin has gone viral, showing scores of Bahamians leaving a ferry that was en route Florida as the island is reeling from Hurricane Dorian. In the wake of outcry, U.S. officials are reportedly blaming the ferry company for treating the refugees this way.

“Big problems on the ferry from Freeport to Florida — announcement just made that any Bahamian without a visa must now get off,” Entin wrote in the tweet on Sunday. “This is not normal. Nornally [sic] Bahamians can travel to USA with passport and a printout of their police record. This is a mess.”

Big problems on the ferry from Freeport to Florida — announcement just made that any Bahamian without a visa must now get off. This is not normal. Nornally Bahamians can travel to USA with passport and a printout of their police record. This is a mess. pic.twitter.com/DESUm2qBGE

According to Entin, Bahamians say they usually can fly into the U.S. with their passport as long as they have a clean police record. During the hurricane, which has killed 43 since hitting the Bahamas a week ago, thousands have fled the disaster.

“[Because] of the hurricane, the rules were changed and they could also come to US under those conditions on ferries and ships. They’ve been doing that for days,” Entin wrote.

So they all lined up and waited for hours to board this ferry. (See my tweets from earlier) when we were about to leave, something changed.

Angus Johnston, who is an adjunct assistant professor at a CUNY college, says the U.S. has for years had facilities that allow Bahamians swift access to the country on planes, which was extended to ferries as well in the wake of the disaster.

The US has facilities at Nassau and Freeport airports to process Bahamians without visas, and has for years. Since the hurricane, that program has been expanded to cover ferries as well. The policy was revoked without warning tonight. https://t.co/0irPo65bPZ

One woman who was seemingly allowed to stay on board estimated that 130 people had to come off the ferry, with 200 people remaining.

“I think this is terrible, I think they should allow everyone to come into the U.S.” she says in the video recorded by Entin. “They originally said you could come without a police record and without a visa, and now they’re taking that back, that’s really ridiculous, that’s awful.”

More than a hundred people with tickets to the US were removed from the ferry just before it launched tonight, on orders from US Border Patrol. https://t.co/pX1MZKZ8Ni

According to USA Today, the incident took place a day after 1,500 Bahamians arrived at Port of Palm Beach in Florida in a coordinated evacuation effort by both governments. Officials reportedly said those refugees had already possessed “valid” documents to grant them entry to the country.

Ferries weren’t the only commutes affected. According to USA Today, some private flights refused to take some Bahamians without a visa lest their pilots be detained, slowing down their return flights.

U.S. Customs and Border Protection on Monday morning told Newsweek that the ferry company Baleària Caribbean was responsible for kicking off the climate refugees. An official said the U.S. would not issue a “blanket statement” on whether people coming from the Bahamas would need visas.

Senators from Florida have called on President Donald Trump to waive any requirements.

On Monday afternoon, Sen. Marco Rubio (R-Fl.) said in a tweet that Saturday’s refugees arrived in the country without any incident because their passports had been pre-screened and their criminal record checked.

“The ship last night apparently didn’t coordinate a pre-screening & then didn’t want to wait for one,” he wrote, claiming that the ferry company was responsible.

Saturday a cruise ship took 1,500 survivors to Palm Beach without requiring them to show visas after coordinating a pre-screening for passports & clean criminal record with @CBP

The ship last night apparently didn’t coordinate a pre-screening & then didn’t want to wait for one.

The Customs and Border Protection spokesperson shared a similar concern. Michael Silva told Newsweek that his office had been in conversation with the ferry company about transporting the refugees to Nassau so they could obtain visas to come to Florida. They’d also reportedly informed airline and shipping companies to make sure those fleeing had the valid paperwork and that the agency would’ve processed their visas had they found a way to a U.S. port.

Saturday a cruise ship took 1,500 survivors to Palm Beach without requiring them to show visas after coordinating a pre-screening for passports & clean criminal record with @CBP

The ship last night apparently didn’t coordinate a pre-screening & then didn’t want to wait for one.

Update 7:45pm CT, Sept. 9: A U.S. Customs and Border Protection (CBP) spokesperson told the Daily Dot in a statement that it is supporting the humanitarian mission in the Bahamas in the aftermath of Hurricane Dorian.

“CBP continues to process the arrivals of passengers evacuating from the Bahamas according to established policy and procedures—as demonstrated by the nearly 1,500 Hurricane Dorian survivors who arrived at the Port of Palm Beach, Fla., aboard a cruise ship on Saturday and were processed without incident,” the spokesperson stated.

The spokesperson said that CBP relies on transportation companies to ensure the safety and wellbeing of people affected by the hurricane.

“CBP was notified of a vessel preparing to embark an unknown number of passengers in Freeport and requested that the operator of the vessel coordinate with U.S. and Bahamian government officials in Nassau before departing The Bahamas,” the spokesperson said.

“Everyone who arrives to the United States from another country must present themselves to a CBP officer for inspection at an official CBP Port of Entry. All persons must possess valid identity and travel documents. CBP has a Preclearance operation in Nassau,” the spokesperson said. “CBP is committed to carrying out our duties with professionalism and efficiency—facilitating lawful international travel and trade.”

The Daily Dot has reached out to the ferry company and will update the report if they respond.