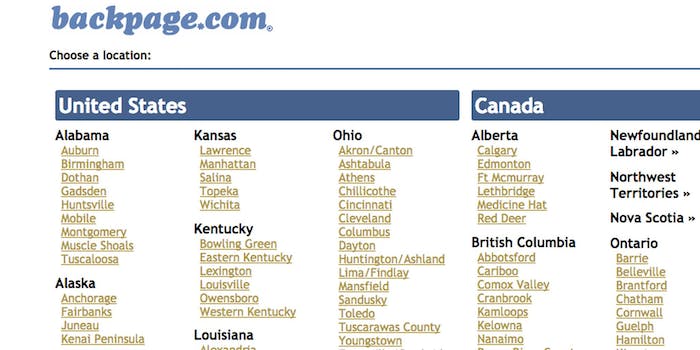 A shocking percentage of the site's $51 million revenue came from its adult services ads.

Backpage CEO Carl Ferrer was arrested Thursday on allegations that company was making money from the sex-trafficking of adults and children through ads on the site.

According to Talking Points Memo, a California search warrant of Backpage’s business records uncovered that 99 percent the company’s $51 million gross income over a 29-month period came from its adult-services ads—many of which included victims of sex-trafficking and children under 18.

Ferrer faces multiple felony counts of pimping, which, under California law, is defined as receiving compensation for soliciting a prostitute.

“Raking in millions of dollars from the trafficking and exploitation of vulnerable victims is outrageous, despicable and illegal,” California Attorney General Kamala Harris told the Los Angeles Times. “Backpage and its executives purposefully and unlawfully designed Backpage to be the world’s top online brothel.”

If convicted, Ferrer could face up to 22 years in prison. California authorities also issued warrants for the site’s controlling shareholders, Michael Lacey and James Larkin.

“Backpage’s profiteering from sex trafficking and prostitution is equivalent to the East India Company’s facilitation of the African slave trade,” Dawn Hawkins, executive director of the National Center on Sexual Exploitation, said in a statement. “Their business model is based on sexual exploitation. Serving as a global, modern-day auction block, Backpage collects fees from individuals posting advertisements offering human beings who are bought and sold for sex.”