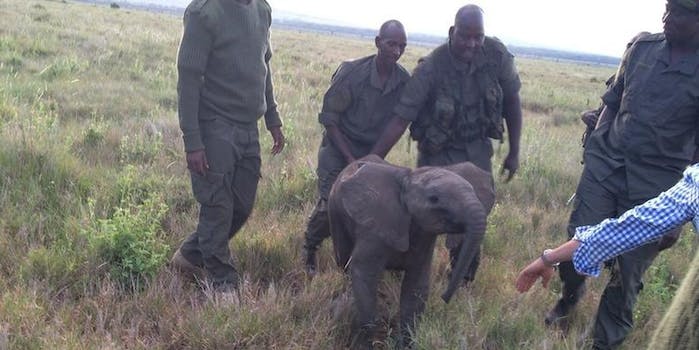 If you need help restoring your faith in humanity today, this is a story about some very nice people helping a lost baby elephant find its mother.

According to a recent post on the Lewa Wildlife Conservancy Facebook page, the baby elephant was found by a group of anti-poaching rangers on Tuesday at the conservancy in northern Kenya after it wandered off from its herd.

After reaching the calf, the rangers guided it slowly back to its family, which was over a mile away at this point. When the rangers got close enough, the mother immediately came running over to reclaim her lost baby and return it to the safety of the group.

The rangers happened upon the tiny calf (“tiny” being a relative term) just in the nick of time. “If the calf had not been reunited with its family, its chances of survival would have been very slim,” the Facebook post says. “A pride of over 10 lions was on its trail, hoping to have a chance to hunt it down.”

All in a day’s work for these anti-poaching rangers, who watch over a population of close to 6,500 animals every day.

While this particular story has a heartwarming ending, it’s been increasingly difficult for the wild African elephant to survive in the wild. Poaching continues to pose an existential threat to these majestic creatures.

“The poaching situation of elephants in Africa is actually at crisis levels,” Paula Kahumbu, CEO of Wildlife Direct, told the PBS Newshour last year. She estimates that 100,000 elephants have been lost to poaching in the last three years alone.

At that rate, Africa could lose its entire population of wild elephants within the next ten years. That’s why the Lewa Wildlife Conservancy is launching a Crowdrise funding campaign to build an underpass for their elephants, so they can have reduced contact with humans and have better access to their grazing fields.

Clearly, Kenya could use more dedicated rangers like the ones who helped out our pint-sized friend.