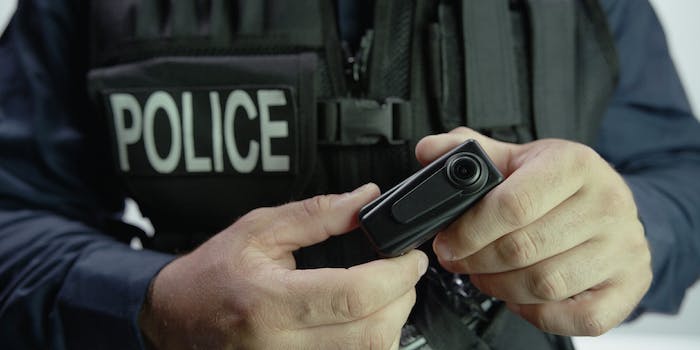 The truth about those ‘free’ police body cameras

By now you’ve read the news, likely over and over again, that TASER International—now Axon Enterprise, Inc.—has offered to give away body cameras to every police officer in the United States, for free, along with one year of “data storage, training, and support.” The coverage was extremely positive; the New York Daily News even went so far as to shame the NYPD for declining to take the company up on its offer to provide free bodycams.

Now, there’s no way that a reporter who hasn’t obsessively tracked this company could be blamed for not knowing the following, but allow me to inform you: Axon isn’t changing much about how it sells bodycams. And it’s not really giving anything away.

Let me show you.

Have a look at this contract. It’s from an agreement with Fort Worth, Texas, police for 400 body cameras. Here’s what you need to focus on: 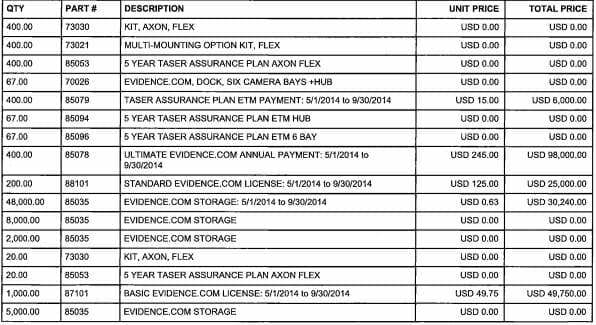 Those were line items for the first year of the contract. What you’ll notice is that the actual body cameras—the “KIT, AXON FLEX”—cost precisely nothing.

Here’s another contract (scroll to page 4)—this one for 525 body cameras in Albuquerque:

Again, the bodycams were free.

And one more—90 bodycams for police in Hickory, North Carolina: 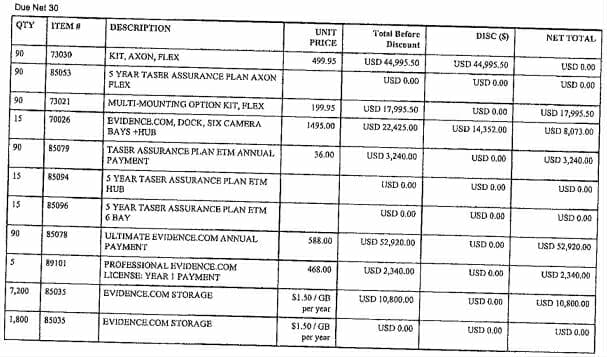 The bodycams were listed at $499.95 apiece, but that price was waived; the cameras were discounted to $0.

I have a bunch of these contracts—which I’ve been collecting, with the help of Alan Hovorka, like Imelda Marcos collects shoes. So, I know that this free bodycam pricing model is not uniform; in some of Axon’s contracts, they do charge for bodycams, and then apply the discounts in different ways. But the main gist has been consistent in most of the agreements I’ve seen: The actual profit center for Axon has not been in selling the bodycams themselves. It has not even been in the storage, as some outlets have reported. (You’ll notice in the above line items that storage was also heavily discounted.) Instead, the profits came largely from access to Evidence.com via annual licensing fees (see above: “ULTIMATE EVIDENCE.COM ANNUAL PAYMENT,” “ANNUAL EVIDENCE.COM, YEAR 1,” etc.) Akiva Freidlin, on Twitter yesterday, compared it to the Gillette sales model: The razors are cheap; the blades are astronomically expensive.

The giveaway that Axon CEO Rick Smith announced this week wasn’t really a giveaway, in other words. It was just a marketing ploy. And a very good one, if media coverage was any indication.

Axon’s competitors are hoping that such coverage was irrelevant.

In an email, Utility’s CEO, Ted Davis, told me that Axon’s announcement was a “‘Venus Flytrap’ marketing campaign” because it was designed to lure police departments into an Axon contract for the “free” bodycams, only to then overwhelm those departments with storage and licensing fees later on. “The campaign targets an unsophisticated buyer, [but] most larger departments will not fall for this ploy,” Davis wrote. “After all, all of the competitive bidding for body cameras incorporate a total cost of ownership over a five-year or longer lifecycle. Sophisticated buyers wisely measure the cost vs the capability of the product offering, and determine the best fit for the need.”

Digital Ally’s CEO took a similar view: “This is something that is not new in the industry,” he told me. “You either pay now or you pay later. [This was] just Rick and Taser trying to fool the end user.”

That may’ve been true. But if performance was the real indication of success (instead of media coverage) Axon still won. As Elizabeth Joh noted in a typically astute piece for Slate, Axon has been winning a majority of new bodycam contracts nationwide, with some occasionally notable exceptions. Axon’s shrewd marketing in this case is likely to keep that trend going.

But really, is this the kind of company police departments want overseeing the rollouts of bodycams nationwide? As Joh pointed out, “Axon is exerting an undue influence on policing itself.” That means “important questions about how body cameras operate and how their resulting data should be treated have been outsourced to a private company.”

It’ll be worth keeping keen eyes on where those tactics will lead next.

Matt Stroud is a journalist and author of the weekly newsletter Official Police Business, which you can sign up for here. Follow Matt on Twitter at @MattStroud.