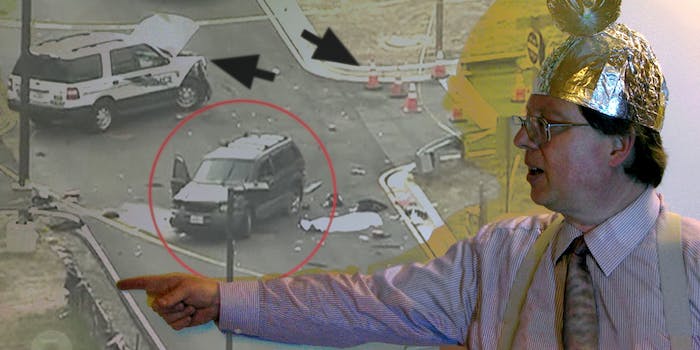 Awake Dating is crowdfunding for a social media site.

As you may know by now, Awake Dating is where to go if you’re looking to find romance with a fellow truther. But if you just want to hang out and post memes with your fellow awakened, the creators of Awake Dating are embarking on a new venture: Awake Social, the Facebook for conspiracy theorists.

“Many of our members have told us that they are ‘totally disillusioned’ with social media, and have deleted their accounts elsewhere over the past few years,” Jarrod Fidden, creator of Awake Dating, told the Daily Dot over email. Often, this is because sites like Facebook, Twitter, and OK Cupid have shoddy reputations when it comes to security and privacy, and if you believe the government is constantly surveilling us, you may not be inclined to let Snapchat scan your face. “Facebook does not cater for the awake audience,” Fidden said.

Because of that, Fidden is launching an Indiegogo campaign to fund Awake Social, which will function a lot like Facebook. Users can create profiles and groups, write posts, like and share others’ content, live chat, and eventually play games. “Not a mass market ‘free’ social service where you will be followed by incessant ads, but a private members-only social network—available via a yearly subscription—that will be synced with our existing Awake Dating membership database,” said Fidden.

One of the ways in which Wide Awake Media (WAM), the parent company of Awake Dating and Awake Social, plans on keeping users’ identities safe is by encouraging them to post less—making them pretty much the opposite of every other social media site.

“The main reason anonymity does not exist is because users reveal so much private information. At WAM, we recommend users think about what, who, and how they display info everywhere online—not just with WAM,” WAM writes in its security guidelines. “As part of our program we intend to educate our WAM users on tools, techniques, and strategies for achieving a high level of personal privacy in a world that seems to be at war with one’s dignity and identity.”

WAM also promises that its not giving over any user information without a fight. “…We live in a dangerous world, where certain bodies believe they have a right to ‘unlock your info’ and you have no right to due process. This is a sign of sickness, but this is our world,” according to the site. “We, at WAM, will do what we can to ensure that when and IF the bodies come for your data, that this is PUBLIC, REVIEWED, AUDITED, ARGUED, DEBATED.”

As concerns about privacy, surveillance, and Big Data increasingly become a part of daily life online, a site like Awake Social may even appeal to those “asleep” out there.

Or maybe those concerns just add to the overall “awakening” of the general populace. Anyway, Facebook is so 2010—see you on Awake Social?