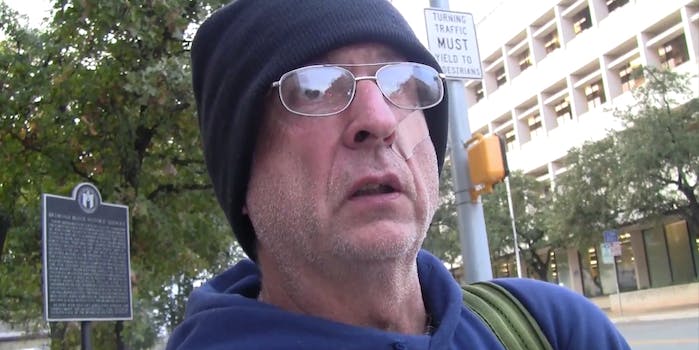 A homeless man in Austin gets behind the camera and shows a side of the city few people are used to.

Sandy has already collaborated with Joseph Costello, who runs the YouTube channel QuietAssassins, on a couple of prank videos already, and he asked Costello to borrow one of his cameras to film a day in his life. He shows off his dry stash of clothes, hidden so that nobody else can steal them, where he sleeps, and just some of the places he visits on a normal day. Even in Austin it can get cold at night.

Dispelling the idea that all homeless people are alcoholics, Sandy—who has a computer science degree—mentioned going to the local library to keep himself informed about the news and even opened up about the mind-controlling church that led to his becoming homeless.

Due to popular demand, Costello set up a GoFundMe page for Sandy and is trying to send him home to Michigan so that he can stay with his family and search for employment.