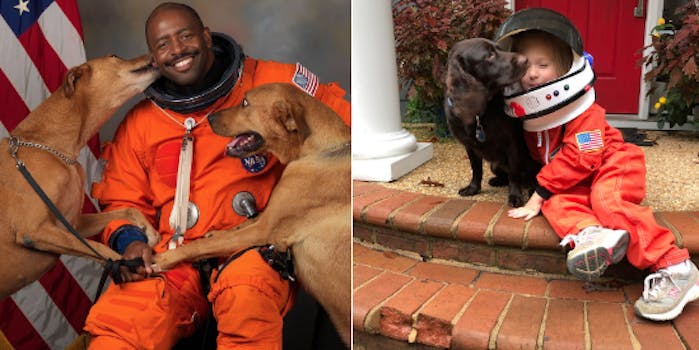 'This image warms my heart.'

Virginia dad Andrew Miller’s 4-year-old daughter only had one demand for her Halloween costume this year: She wanted to be “that funny astronaut.”

The man she was referring to is Leland Melvin, an engineer and now-retired NASA astronaut whose 2009 work portrait went viral for featuring his two happy rescue dogs, Jake and Scout. It is, quite simply, the most relaxed an astronaut has ever looked while wearing a space suit. But according to Melvin, getting the original picture taken was a production—he had to sneak them into the building since pets weren’t allowed on the NASA premises.

“I had a van and I drove the dogs in,” Melvin told Gizmodo earlier this year. “NASA doesn’t allow dogs to be on-site, so when I showed them my NASA badge, I kept the window up…and I had the stereo blasting because the dogs were barking. So I gunned it and the [security guard] didn’t chase me or anything.”

When he got to Studio 8 at the Johnson Space Center, Melvin reportedly took Jake and Scout up the back stairs and into photoshoot area.

“I had all these dog bones, and they were just sitting there eating the bones, just grubbin’ and happy,” he said. “The dogs just ran over to me. And [I said to] the guy who took the picture… ‘Dude, start shooting!’” And the rest is history.
Miller and his daughter set out to re-create the photo shoot on their front stoop this weekend with a little help from their family dog. He tweeted the final results:

Me: What do you want to be for Halloween? My 4 y/o: That funny astronaut. Me: I got you, girl! (cc @Astro_Flow) pic.twitter.com/0eHI9HbMGm

Off the power of its cuteness alone, the photo got some traction on Twitter. It found its way to Melvin’s mentions, and he gave the costume his official seal of approval.

This image warms my heart. So appreciative of you getting the shot I got many years ago. Thank you. 🚀🚀 https://t.co/gsTq8yq4n1

“This image warms my heart,” Melvin wrote. “So appreciative of you getting the shot I got many years ago.”