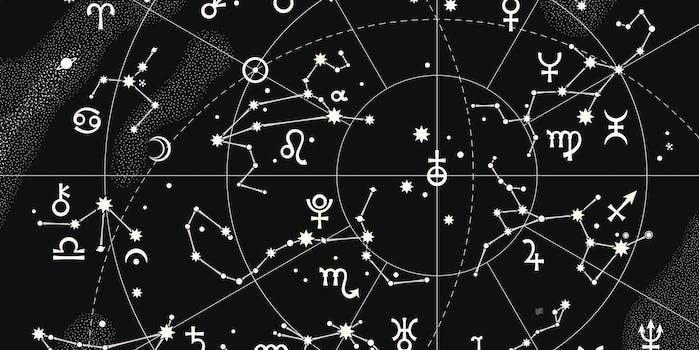 Why astrology is making a comeback online

In a time of chaos, more people are looking for meaning in their sun signs.

Before the election, I discovered that Donald Trump is a Gemini and Hillary Clinton is a Scorpio. As a fellow Scorpio, I tweeted a joke that “of course I’m not voting for a f***ing Gemini.” Almost immediately, my Gemini followers were in my mentions, imploring me not to lump them in with someone like Trump and listing the various untrustworthy traits of Scorpios.

This is all to say that people have strong opinions about their sun signs.

Astrology is the practice of divining information about human affairs from the movements of the stars and planets—and it’s taken very seriously in many cultures. But for a long time, there have been two camps: those who are skeptical that one’s entire life can be determined by what stars they were born under, and “New Age-y” types who are belittled for taking it too seriously.

However, a third trend is emerging. Twitter and Tumblr accounts dedicated to astrology humor, memes, and sincere posts are introducing people to astrology—and allowing them to find new lenses for their identity.

You’ve probably seen astrology vernacular creep into internet discourse. Twitter accounts correlate zodiac signs to behaviors and tangible objects, whether it’s Taurus as anime characters or Leo mood boards. Broadly tweets horoscopes daily, BuzzFeed has a quiz to tell you what meme you are based on your sign, and the Hairpin has articles like “Astrology is fake but Capricorns are a conspiracy.” There’s also an entire website dedicated to telling you whether Mercury is in retrograde. Clearly, there’s a market.

While some of these jokes certainly come from a rudimentary or disrespectful understanding of astrology, many of the people behind these accounts do believe in the power of the stars. Dorothea Lasky and Alex Dimitrov, the team behind Twitter account @poetastrologers, were both interested in astrology from a young age. Dimitrov’s parents were born on the same day, two Sagittariuses who birthed a third one. “It seemed bizarre to me and also not a coincidence at all that my parents ended up together.”

Lasky also got into astrology to more or less make sense of things. “I was obsessed with this particularly crazy Gemini (story of my life), and so got into astrology in a big way to figure him out more,” she told the Daily Dot. “It was a crash course and it did make me believe, so I’d say that now my belief in the zodiac is relatively serious.”

Luke Dani Blue, creator of the Tumblr Seagoat Astrology, came into astrology with more skepticism. “I’m not really into spiritual trends, and I always thought astrology was kind of stupid, but when I started looking into it, I realized it feels more accurate and meaningful than things I was getting from, say, my therapist.”

While memes and online jokes about horoscopes are often riffing on pre-defined personality traits, with formats such as “Libras be like…,” there is an undeniable comfort in seeing yourself in relation to these categories—or else these jokes wouldn’t work.

“Zodiac humor is very relatable,” says Isa, co-creator of @hornyscopes. “People love relating to stuff or seeing what their sign says about them.”

You could say astrology is the new old identifier. In a time when the internet provides no shortage of ways to identify oneself outside of the typical race/gender/religion signifiers that define us in everyday life, it’s easier to pluck personality traits from the narrow choices provided by a zodiac sign or a Hogwarts house quiz than it is the breadth of human experience. You can chalk up your stubbornness to being a Scorpio, or your work ethic to being a Hufflepuff, or your relationship choices to being a Carrie rather than a Miranda.

The problem with doing so, however, is these identifiers can be mistaken for an explainer for your behaviors without holding you accountable for them.

“I’ve learned to really be careful with someone who’s looking for an excuse to not take responsibility for their own choices, or who’s weakly connected to their own sense of themselves and intuition,” said Blue. “You have to gently remind people that this is a tool to support your intuition—it’s not a tool to replace it.”

But perhaps we are drawn to the parameters of astrology because, in both a world and a Twitterverse that feels uncertain and grim, we feel vulnerable and overwhelmed. “I believe it has taken off because it’s something that lets people forget about their problems,” says Lasky.

Blue agrees: “I think when things are chaotic, we look for a way to make sense of things.”

Life is increasingly full of options. The frameworks that defined daily life for so long—nuclear families, church, full-time jobs—are either unattainable or unwanted. Today, our worlds are centered on mobility, whether that’s navigating geography, loved ones, or different spaces online.

But with those options often come anxiety—because if you can be anyone, then who are you?

“Though modern Americans have more choice than any group of people ever has before, and thus, presumably, more freedom and autonomy, we don’t seem to be benefiting from it psychologically,” psychologist Barry Schwartz writes in his 2004 book The Paradox of Choice.

Maybe this is why we take comfort in fitting into one of 12 “pre-destined” categories. Not to mention in times of crisis, whether personal or political, there is comfort in being validated. The world may be crumbling, but at least you know who you are. And while nobody is just a Scorpio or a Slytherin, those identities can be tools to uncover a deeper self. Or just to know how you should handle a Trump presidency.