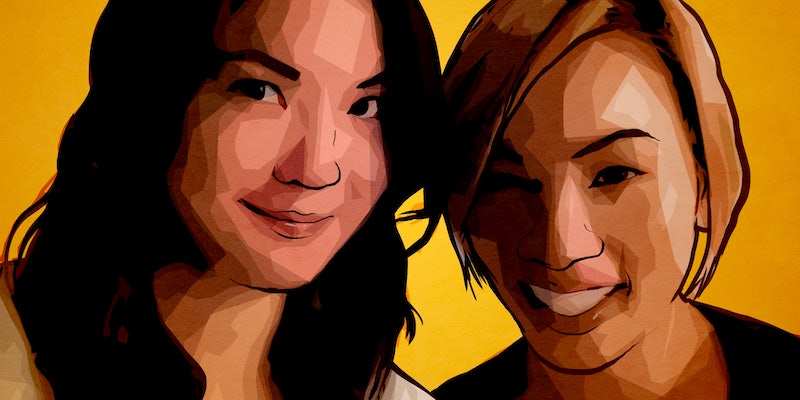 Meet the body-positivity blog for the underserved community.

At age 8, Lisa Lee was already aware she was a little bigger than the rest of the Asian-American kids on the playground. This was no thanks to her family, who never shied away from chiming in about her weight.

By the time she was in high school, her relatives were often referring to her as “big-boned,” “healthy,” or outright “fat.” The summer before she went to college, Lee decided to change all of that. She enlisted in a Taiwanese weight-loss spa that promised to help her shed pounds fast. Her mother, who had been a size zero as a young adult, jumped at the notion that her daughter could slim down and match, at least in her eyes, her outer beauty with her inner.

After a month of extreme dietary restrictions, and undergoing painful electric treatments intended to “shock” her muscles into burning more calories, Lee shed 20 pounds. As internal pressure mounted to keep the weight off in college, Lee resorted to bingeing and fasting, ultimately regaining more weight than she’d lost.

In 2011, Lee met Lynn Chen, an Asian-American actress who shared similar cultural struggles with body image. Together they founded Thick Dumpling Skin, a body positivity blog that serves as a safe space for Asian-Americans to share their struggles with their bodies and with the pressures to meet both Asian and Western beauty standards.

“Lynn and I really created it as a space for ourselves, knowing that it is an issue that touches on the lives of so many people who are probably like us, who have had a lot of shame attached to the experiences that we’ve had,” says Lee.

Thick Dumpling Skin features reader submissions, including personal stories about body image and Asian-American identity, and promotes resources geared towards Asian-American mental health. It acts as a gathering place for those who often don’t get to hear their voices in Western media.

The pressures that Asian-Americans face are complex. Though the term “Asian-American” spans many ethnicities and cultures, Asian-Americans are generally forced to deal with two sets of beauty standards, Western and Eastern—both of which value slimness.

Lee attributes the image of a petite, dainty Asian girl to Western fetishization, which she says has gradually been internalized by Asian communities.

“For so long, Asian-American communities have born the burden of what stereotypes are being projected onto us,” said Lee. “And in particular, with Asian-American women, we experience quite a lot of the stereotypes of being small and petite and submissive. Which I think is very much internalized by our own communities as well, to signal to us what is desirable.”

And conflicting with that petite ideal is the cultural focus around food, since, in many Asian cultures, sharing dishes and meals is seen as a sign of love. Relatives and friends often urge you to eat, and refusing food can feel rude or hurt a loved one’s feelings.

“I have to say that I am Chinese-American, so I can’t claim to know what it’s like for other Asian-American communities, because we’re so diverse,” said Lee. “But I know for me, growing up, there was always this really mixed message of ‘Have you eaten yet?’ because food is a way to express community and love and family. Then at the same time, I get the messages of ‘Well, you can’t eat that much, because you’ve gained weight.'”

Bringing up weight gain or loss in casual conversation isn’t just annoying or uncomfortable—it can also be triggering for eating disorder sufferers.

Asian-Americans often shy away from seeking professional help because it is seen as a cultural no-no to bring their problems “outside the family,” which often translates to sufferers staying silent.

“One reason for the silence may be the need to focus on family strengths and resiliency—admitting to psychological weaknesses among individuals may endanger the belief that the relocation process was successful or worth the stressors, losses, and family strain related to immigration,” says Letamendi.

The idea of the “high-functioning” Asian, or the “model minority myth,” may also have a negative impact on self-expectations. If one is having challenges related to anxiety, depression, or eating disorder behaviors, yet is still captain of the debate team and scoring a nosebleed GPA, “it may be difficult to recognize the need for psychological interventions of support,” says Letamendi.

Through its online platform, Thick Dumpling Skin has helped raise awareness about eating disorders and body dysmorphia, and the need for sufferers to seek outside help without feeling stigmatized.

“It’s very hard to find centers that are dedicated toward Asians and Asian-Americans. By creating a space online that is accessible by anybody from anywhere, and reaching a particularly vulnerable age group, Thick Dumpling Skin addresses this larger conversation,” says Lee.

To this day, Lee still hasn’t talked to her parents about her eating issues, despite becoming a sort of spokesperson for Asian-American body positivity. She hopes to more subtly affect them through spreading awareness and being more vocal about the current state of her mental health.

“I think it’s very hard for people our parents’ age to completely overhaul their behaviors,” says Lee. “The biggest impact that we can have on these issues has to come from people like us, who have experienced firsthand how it feels to have your parents make ridiculous comments about your body in public forums, and who have had parents react in a way that is not healthy to our mental well-being.

“Our hope, between Lynn and I,” she continues, “is that we can reach younger people so that we are really changing the hearts and minds of people one at a time, and really affect their actions in their day-to-day.”