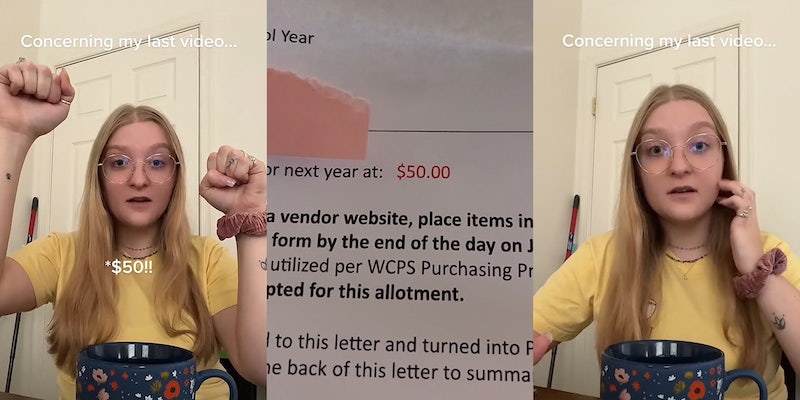 ‘I got two stacks of colored paper’: Art teacher says school gave her $50 to buy a year’s worth of school supplies

An art teacher has gone viral after saying they were only given $50 to purchase a year’s worth of art supplies for their school.

In a video with over 2.5 million views, user Hayley (@hcross93) reveals her year’s supply budget, which amounts to a total of $50.

In a follow-up video, Hayley clarifies that this was the budget for one school where she spends a quarter of her working time. She says the rest of her time is spent at another school where she gets a yearly budget of around $350, a number she dubs “great.”

@hcross93 Sorry I misspoke during the amounts. I really appreciate the positive comments and concerns. I hope this answers a lot of the questions asked and I assure you, I will not let my kiddos have a boring year. ❤️ #teacher #art #artteacher #artteachersoftiktok #artteacherlife ♬ original sound – Hayley 🪴

In the comments, users disagreed, saying that even $350 felt like too small of a sum to adequately prepare art supplies for a whole school’s worth of students.

“A healthy budget for an elementary art teacher starts at a low of $2000,” another claimed.

“$350 is not good. These school districts need to do better,” a third added. “I’m a high school art teacher. So I understand the struggle.”

Hayley wrote in a comment that she works at a small, low-income, Title 1 school, saying that the $350 for her has always been “a lot.” In the video, she thanked those viewers who offered to donate to her classroom, but she politely declined.

“I don’t want there to be any kind of questions of where my intentions lie or where the money is going,” she continues. “My purpose for making the TikTok was to show people that might not be aware of the state of the arts in public education. It’s bad, it’s always been bad. But right now especially.”

Some pointed out that Hayley can simply write off purchases of art supplies on her taxes. While Hayley states this is true in another follow-up, she then explains that it does not affect the problems at the root of the issue.

In this video, Hayley says that she lives with her husband and is currently working on getting her master’s degree, which is required for her job.

“I cannot possibly afford to purchase supplies for two entire schools,” she details. “If I were to front the money for the supplies, I would be out…I don’t even know how much money.”

Commenters continued to support Hayley, pointing out the perceived discrepancies in art spending when compared to other areas of school life.

“And yet we build multi million dollar athletic stadiums that get used 6 Friday nights a year,” a second added.

“When I was 16, our school spent 1 mil on a new scoreboard and 3 mil on a new football field house,” claimed a further user. “art students had to buy all their own art supplies.”

Many commenters still said that they would be happy to donate to Hayley’s class. While she says she appreciates the gesture, she explains that she did not post the video asking for donations. Rather, she simply wanted to draw attention to a struggle that many teachers across the nation are facing—and hopefully, inspire systemic change.

“If you want to make a change, make it locally, where you are,” she concludes.

The Daily Dot reached out to Hayley via TikTok comment.