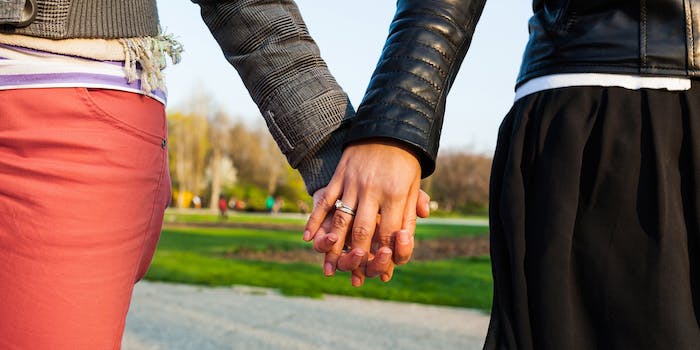 'I want this to be a family store,' said the hand-holding hater.

A lesbian couple was shopping at an antique mart in Hot Springs, Arkansas, when the store’s owner asked them to stop holding hands.

The couple, Ashley Looper and her fiancée Jessica Perkins, told local news station KARK that they were offended by the request, put their purchases on the counter, and left.

Spa City Treasures owner Steve Salyers confirmed that he asked the couple not to hold hands in his store, claiming the couple was “just doing something that was inappropriate to have kids around” and that he would have asked “regular people” to stop holding hands too.

Then Salyers compared the engaged lesbian couple to a pair of strippers.

“I’m a family person, so I want this to be a family store,” Salyers told KARK. “It’s like I wouldn’t want to take my kids to a strip club or something.”

The store owner added that plenty of his customers are members of the LGBT community, but that he just doesn’t want them holding hands.

Since the news broke locally on Monday, the Spa City Treasures Facebook page has been slammed with hundreds of comments and negative one-star reviews from LGBT advocates and allies all over the country.

Most of the comments and reviews blasted Salyers for being a “bigot” and “not a real Christian,” encouraging locals not to shop at the store. Other reviews took a more comedic tone.

“The merchandise was waaay over priced, the employees were distasteful, the entire store smelt of moth balls, and stale clothing,” wrote Stephany Smith of Morilton, Arkansas. “Not to mention, the way the lesbian demon that resides deep within the recesses of my soul cringed the entire time I was in the store. She says we won’t be back.”

Many of the locals who bombarded the store’s Facebook page were straight and Christian-identifying folks who said they had visited Spa City Treasures in the past—and assured Salyers that they would not be returning.

“I’ve been in your store with my heterosexual partner holding hands, and I was never told to leave. Yet somehow a same sex couple holding hands was asked to leave the building,” wrote Facebook user Christina White in a review. “Not only is this a violation of civil liberties and illegal, which could result in quite a large lawsuit for you, it’s unethical, rude, hurtful, judgmental, homophobic, and just plain wrong.”

As for the couple whose casual hand-holding offended the owner of Spa City Treasures, they told KARK they’re just “your average couple” and want to be treated as such.

“We’re not doing this for attention,” Perkins told KARK. “We’re just trying to let the LGBT community know that if you go in this place, you are going to be discriminated. You can’t be who you are. I thought people were changing and more accepting. It hurt more than anything, like he tried to shame us.”