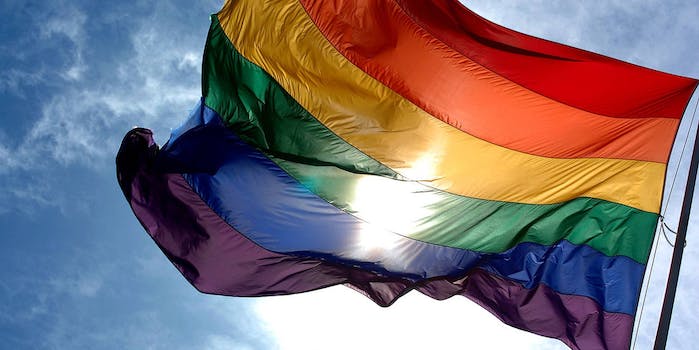 Arizona church doubles down on LBGT-friendliness after homophobic attack

'This is a good opportunity for us to really practice what we preach,' the church pastor said.

A man in Tempe, Arizona, verbally attacked church employees after seeing a rainbow flag hanging outside of Community Christian Church, which Pastor Doug Bland put up so everyone would feel welcome.

According to azfamily.com, the man stormed into the church office and shouted graphic, homophobic comments at the employees, then threatened to pay people to protest outside of the church.

Bland says the man was emboldened by Donald Trump’s election to come inside. “He said that if Hillary would have won, he would have driven right on by the church without stopping. But because Trump won, he felt he had permission,” he said.

As a response to the hate speech, the church put up another purple flag next to its rainbow flag reading, “Lovers in a dangerous time,” referencing a 1984 Bruce Cockburn song about new love during the Cold War, when nothing was certain and despair was in the air.

“I ask you to pray for Community Christian Church, a prayer of thanksgiving that we have made a place of welcome and safety for our LGBTQ brothers and sisters, a prayer that we can continue to make that welcoming stand in courageous, peaceful ways.”

Meanwhile, “Lovers in a Dangerous Time” feels pretty darn relevant these days too.