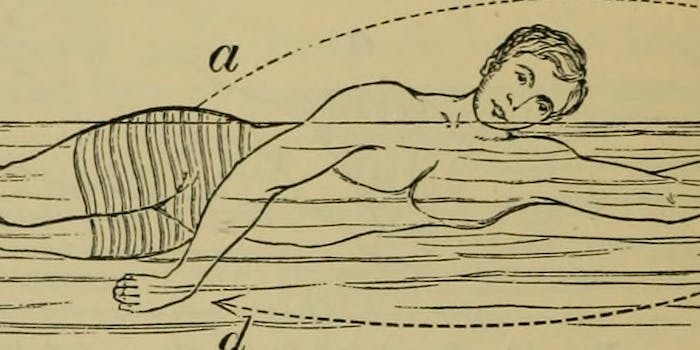 The Olympics are a time for the world to come together and admire the incredible feats the human body is capable of. Also, for many men, it’s a time of gay panic. For instance, could watching or enjoying men’s synchronized diving turn you gay? We can’t have that!

I'm sorry to anyone involved or supporting this, but I cannot watch Male Sync diving as it might make me a little gay…and I can't go there

"They look gay, maybe diving is a gay sport."
Why is my dad like this?

Also, maybe there’s some gay diving conspiracy? We’re not sure.

Apparently, being a gay person get you extra points in synchronized diving. NBC celebrating so-called "diversity" desperate for ratings

Many point out that just because a sport involves two men interacting, it doesn’t make it “gay”—whether that’s a positive or negative thing for you. And that’s true! But this is a symptom of a larger problem: Men are having a hard time with discussions about sexuality and attraction that aren’t centered on the hetero male gaze.

On two Reddit threads (in r/MensRights, natch), men criticize women for “objectifying” male Olympians. They accuse Jezebel and other sites of hypocrisy, for not wanting women to be objectified but being fine with it when they do it men. “oh noez, people find fit, athletic bodies that require so much discipline to acheive [sic] sexy,” another user jokes, making fun of women who complain about men overtly sexualizing them.

Another user described the whole argument as “just gay,” and then directed everyone to a subreddit of “sexually invigorating” images from the Olympics—all of which are of women.

There’s a kernel of truth about finding Olympians attractive. There’s a sexual component to sports, whether it’s synchronized diving or football. It’s bodies, often bodies interacting with one another, in ways that articulate muscles and limbs and all the other things we’re attracted to. Sexual thoughts will happen.

Historically, however, the only people who have had a say in who gets objectified—and how—is straight men. But this year, they’re almost being drowned out by men commenting on other men, women commenting on other women, or women commenting on men. For every subreddit of Olympic nip-slips, there are a dozen tweets from women (and men) about the awesomeness shirtless male swimmers. Sure, some men may really want to end objectification, but more often than not it seems they’re just mad they’re not the only ones doing it anymore.

It would be nice if this year’s gay panic were a death rattle (there are more out gay Olympians than ever before, including diver Tom Daley), but the U.S. women’s soccer team was greeted with anti-gay slurs. For many, a gay Olympics is still a bad thing.