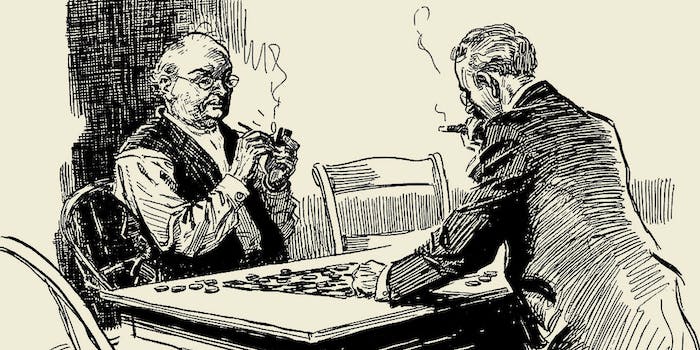 'Women can play, but they better not win.'

Board games seem like one of those industries where everything is pretty unisex. There’s nothing particularly gendered about Sorry or Cranium (though there is some middle-grade heteronormativity in the Game of Life). If anything, there are more games aimed at girls, like Pretty Pretty Princess or Mystery Date. Maybe men were feeling left out, so that’s why now we have the Man Game. Created by Late for the Sky productions, the Man Game is the game where the “best man” wins. And you become the best man by drawing cards and competing at manly tasks, like tying knots, throwing balls, or measuring body parts (seriously). Apparently, it’s as easy as drawing cards “because real men don’t read instructions.”

It also comes with the warning, “Women can play, but they better not win,” in case you needed a tagline for your off-Broadway production of The 2016 Election.

Thinking of life as the Man Game is as good as any metaphor I’ve seen for male privilege, so let’s explore. To “win” at life, you need to accomplish certain tasks. In the game, they’re bits of trivia or feats of strength, but in real life, they’re things like getting a high-paying job, not being sexually assaulted, or having access to good medical care.

As the Man Game demonstrates, you need tools in life (a rope for tying those knots, a ball because men love balls!), and men are often raised with a specific set of tools to help them succeed. For instance, it’s not that women can’t learn to throw a ball or tie elaborate knots or whatever you do in this game, it’s just that these things are expected of men, and because they’re expected, there’s a greater chance a boy would have been told at some point in his life he should learn how to tie a badass knot. Much like he’s probably been shown that he can be the greatest CEO on earth because that path has been paved with many white male CEOs before him.

Women, in turn, aren’t necessarily given the same set of tools. They are given instead a Pretty, Pretty Princess, not to mention, their femininity and their “looks.” So when a woman tries to be a decisive leader, her male coworkers might think she’s being “bitchy.” She might have a harder time speaking up for herself because she was taught for decades that it’s rude, or she gets negative feedback when she does the things she sees her male coworkers doing. Maybe she got pregnant and her boss assumes this means she’s going to stop working, because women are graced, first and foremost, with the tools to be a homemaker and mother.

Race, class, sexual identity and citizenship status all change the odds of success as well. Men can fail. Women can win. But the game of life (even the Game of Life) is built to make certain things more likely.

The Man Game gets great reviews, even from women who say they had no problem winning. Because it’s never impossible to beat the odds—it’s just rarely as fun to try.