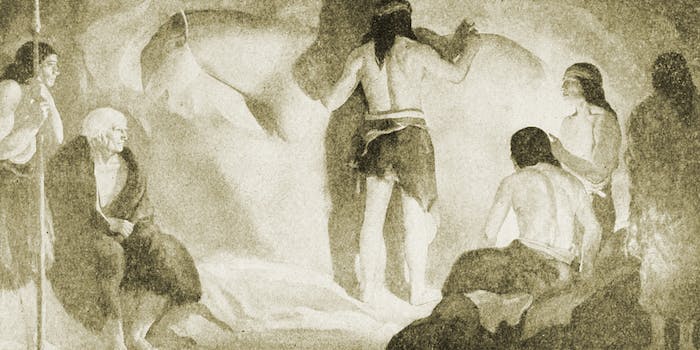 Finally, a place where a man can be a man. Unlike the rest of the world.

Picture someone who just loves interior design. They fawn over decorating ideas in magazines, join clubs to swap tips and post photos of their work, and even come up with cutesy names for themed rooms in their homes, where they host intimate gatherings of people of the same gender.

I bet you thought this person was a woman. Nope, it’s a man. Because men need their man caves.

Anyone who’s watched House Hunters remembers at least one annoying guy who refuses to purchase a perfectly good home because it doesn’t give him space for his “man cave.” The concept is a room that exclusively serves the needs and interests of the man, or men, of the house—interests that typically include beer, football, grilling, and other masculine-coded activities. You’ll probably never see a guy who’s into knitting call the craft room his man cave.

While there are many guides on how to build your perfect man cave, there is also the Official Man Cave site, dedicated to “taking back the world one man cave at a time.” With over 8,000 members, the site awards Best Man Cave certificates to its members, posts recipes and man cave tips, and in general functions as a way for man cave enthusiasts to interact with each other.

“We believe that every Man has a basic, primal, instinctual need to have a space to call his own,” writes the Official Man Cave. “It’s his territory. Furthermore, we believe that space should be used to enjoy his favorite activities, whatever that might be. If you ask most Men why they want a Man Cave, they’ll tell you they’d like a place where they can recharge the batteries after a long day on their job, and a place where they can hang out with their buddies.”

We’ve reached out to the Official Man Cave about its community, but haven’t heard back. Luckily, there are many other pages dedicated to connecting Man Cave-having men. This Facebook page is “a page where we celebrate guy shit! Guns, knives, hot rods, tools, work boots, etc.” This private group with over 85k members allows men to swap manly items: “No purses, clothes, flip flops, just manly things like 4 wheelers, tires, buggys, whatever a fella might need!” The phrase “man cave” is now code for any man-centric community, as evidenced by It’s the Man Cave, a selection of manly memes.

There is nothing inherently masculine or feminine about valuing personal space, but, for some reason, when men do it, it becomes vital and important to the entire concept of masculinity. When you live with someone else, or with your family, finding a space to call your own is important. Kids can be demanding, and quiet time is precious. Everyone does need a moment or 10 to rest and recharge so they can be more attentive spouses and parents and functioning human beings.

However, the concept of the man cave centers around the idea that the rest of the house is the woman’s realm. That a man cannot relax in his living room or backyard, because either that is not a “safe space” for his interests (too many girly decorations or cooking appliances or fragrant flowers perhaps), or he and his buddies will be interrupted by a woman, or some other idea that separates him from his manhood.

But what if you married your wife because you actually share one or two similar interests? What if your wife likes football and wants to watch it with you and your friends? What if when the kids are down for a nap, she thought you could spend some time together? What if she wants to use the basement for something else? None of that matters when a man cave is at stake.

Aside from insinuating women are pests that infest men’s spaces, another issue with the concept of “man cave” is that it implies men are the partners lacking in down time at home—which is apparently not the case. Studies regularly show that men, even unemployed men, do far less housework and child care than women. Working women are more likely to take on household chores, even if they and their partners have equally demanding jobs. Women may want their own spaces too, which is why some places are trying to make “She Sheds” a thing, but let’s not.

The problem with both man caves and she sheds is that they fall into this idea that men are for poker and booze, and women are for crafting and flowers, and never the twain shall meet. But they also promote the stereotype that partnership is a burden, especially for men. A wife is something to put up with, which men aren’t actually forced to do, since marriage is no longer the social necessity it once was.

Everyone needs a night out with friends or some time alone once in a while. But if you need a room dedicated to escaping the women in your life, what’s the point of having them around in the first place?

This is not to judge anyone’s marriage. If having man caves and she sheds is what keeps you  happy and communicative, have at it. But men, ask yourselves, do you really need a man cave to watch the game, or can you do it in the living room? We promise, you can drink beer there, too.