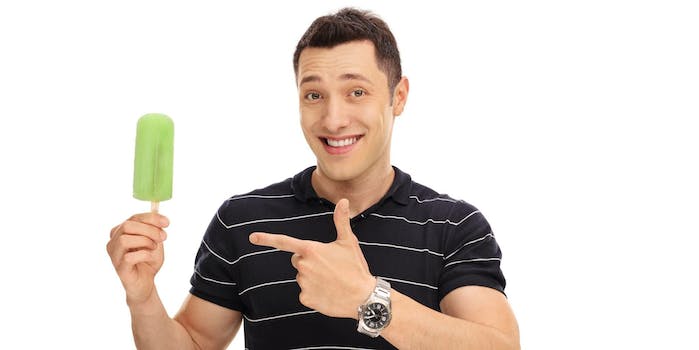 There are a few things in life that, despite background and politics, we can generally all agree on. Ice cream is one of them. Even the lactose intolerant and vegan must agree that ice cream, sorbet, gelato, whatever variations on the theme, are great pleasures in life.

And yet heterosexual masculinity has a weird way of ruining literally everything. Take Richard Hammond, co-host of The Grand Tour, who recently said on his show that he doesn’t eat ice cream because he’s straight.

The idea came up when his co-host suggested that one car interior, while lovely, would be hard to eat a Magnum bar in, presumably because you’d be paranoid about making a mess. To which Hammond responded he didn’t eat ice cream, because of “something to do with being straight.”

It probably doesn’t need to be said that this is a ridiculous association, and Hammond was made fun of by others on the show for his bizarre line of reasoning. But it points to how many straight men still feel the need to drastically distance themselves from anything they associate with homosexuality while still insisting “there’s nothing wrong with it.” I have personally known men who’ve said they don’t eat bananas, use face moisturizer, wear pink or purple, listen to pop music, or drink sweet cocktails all in the name of maintaining an outward facade of heterosexuality. And don’t you dare bring up pegging to these guys.

Despite drastic changes in the past generation, homosexuality is still stigmatized to the point where well-meaning, “accepting” straight people will go out of their way make sure no one thinks they’re gay. What this “no homo” insistence implies is what’s at the very heart of discrimination: the belief that a person who is gay is lesser than a person who is hetero. Sure, it is a helluva lot harder to be gay because internalized rankings such as this make it so, but it is not worse or a handicap or something to overcome. But by using such “eww” language, men like Hammond imply the undesirability of being gay, which is also what men are implying about women when they freak out over an action that’s mistaken as “girly.”

We live in a culture in which we assume people are straight until they come out. The old defense of not wanting to be “mistaken for something I’m not” only works when the identity you’re being mistaken for holds less power. Gay men being “mistaken for” straight face their own problems, such as being unwillingly put in the closet, but discrimination isn’t one of them.

If we didn’t assume straightness, if we figured that anyone could have any sexual identity until they chose to reveal specifics, perhaps Hammond would not worry so much about being perceived as gay. Perhaps he could enjoy an ice cream without the paranoia that his peers would make false assumptions about his life. What a wild idea—enjoying the things you like without fear of judgment.