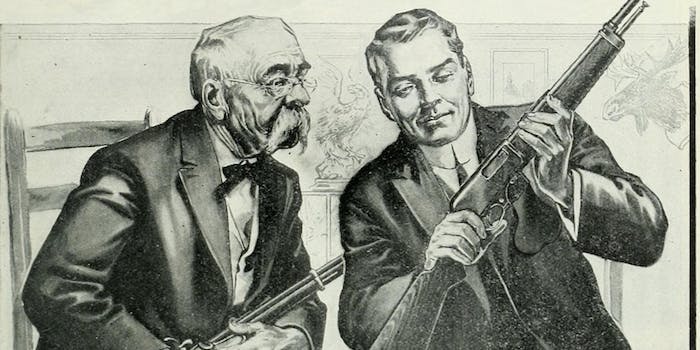 The TAC-SAC is balls for your gun. Yeah.

Cis men are obsessed with their balls. How else to explain scrotum selfies, why “having balls” is slang for being tough, or that one episode of Sex and the City where Steve wants to get a ball implant? They are certainly a physical marker of manhood to many, so much so that lots of men insist on adorning their belongings with them just in case you forgot that they have them beneath their pants. 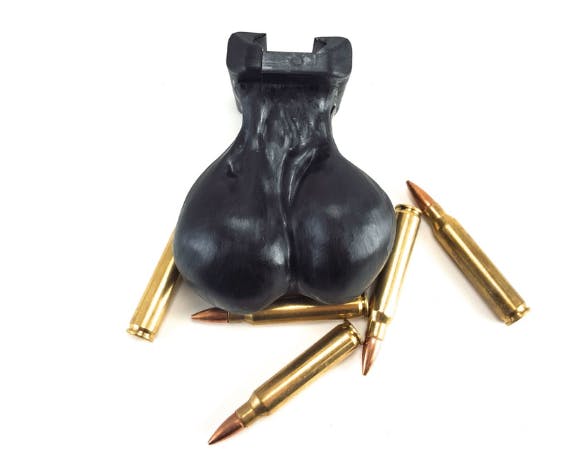 The TAC-SAC “is the premier high-speed, low-hang novelty accessory for your firearm, paintball marker, or airsoft gun,” according to the website. It’s marketed as a gag gift for the gun nut (get it?) in your life. It’s made in America and comes in black or khaki. On its FAQ page, it warns to “make sure it’s a boy-gun” before you get one, raising lots of questions about the gender identity of inanimate objects.

The product has been around since 2015, but a now-deleted tweet brought it to our attention. The TAC-SAC is obviously a nod to the famous TruckNutz (or, for the toxically masculine hipster in your life, Bike Balls), and it’s not like there isn’t a world of things like vulva jewelry out there too. But there’s something about nuts on a gun that really embodies everything about fragile masculinity.

The majority of gun owners in America are white men, and according to researcher Jennifer Carlson, many men who own guns are suffering from a “crisis of confidence” in their place in America and general society. “Restrictions [on guns] are received as a personal affront to men who find in guns a sense of duty, relevance, and even dignity,” she writes. In a world in which the traditional markers of masculinity like being a homeowner or the sole breadwinner are more difficult to obtain, being a tough guy with a gun becomes a way to cling to that identity.

The same can be said for testicles. For many men, they are more than just a sexual organ: They are a symbol of masculinity. When naked statues of Donald Trump began appearing around the country, they featured a small penis and no testicles. “The problem with this seemingly radical installation is the underlying theme that feminized men are less fit to lead,” says the New West. There is a psychic connection to having large masculine genitalia and being powerful, intimidating, and fit to lead. Our language for someone being tough and brave is literally that they “have balls,” which for many translates to “is like a man.”

So with these powers combined, the TAC-SAC becomes the ultimate symbol of masculinity’s crisis of confidence. It’s not enough to protect your dignity and place in society with a gun, now you must display your outsized masculinity alongside it.

Of course, TAC-SAC says it’s all a joke for $39.99, but it’s a joke that plays off our deeply seeded cultural ideas about balls, guns, and everything they symbolize about masculinity. Which makes for a pretty serious joke.