This one's on everyone.

If there’s one thing men seem to enjoy, it’s making more men. That’s not a bad thing—creating more life is kind of what we’re here to do. But if you were to look at the baby clothes market, you’d think letting strangers know that your child has a penis is extremely important.

Cutesy, gendered baby clothing in pinks and blues has been popular for a long time (even when pink was the color for boys). But recently, things are getting intense. Now it’s not just about dressing your boy in blue, but about signaling the extremes of masculinity.

There are outfits that say your baby boy is a “stud,” a “ladies man,” and “daddy’s little man.” There are shirts that remind you “boys will be boys,” and that show off how buff your baby apparently is, and ones that implore you to “lock up your daughters” because your 5-month-old son is, what, going to have sex with them?

But since they’re tiny humans, it’s considered cute instead of creepy. (If you don’t believe me, imagine a 35-year-old wearing a “ladies man” T-shirt). 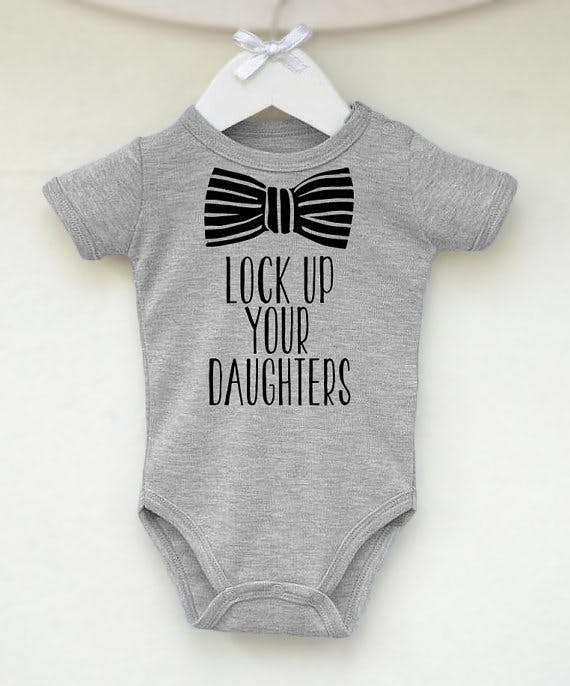 There’s also a lot of matching clothing for fathers and sons, whether it’s “big man/little man” T-shirts, “beast/beast in training,” or the dad who needs beer while his son needs milk. There are even onesies that assume dad is incompetent when it comes to childcare.

Of course, there’s no shortage of silly clothing for babies (so. many. poop. jokes.), or matching clothes for dads and daughters. But from a young age, parents are encouraging explicit gender identities in their children.

For example, much gendered clothing for girls emphasizes femininity, and especially purity, enforced by the men in their lives. These girls are doomed to be fought over by their fathers and their future husbands—but either way, the men are in control. 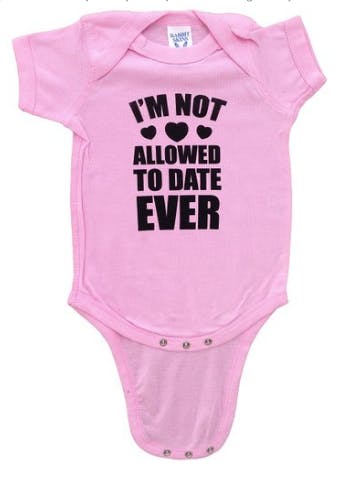 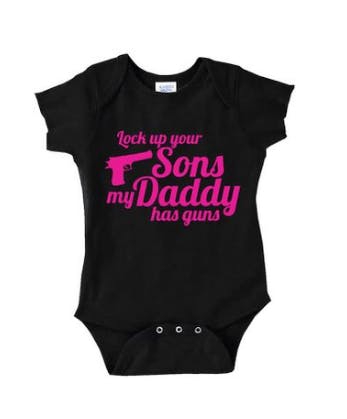 Dr. Judith Myers-Walls, professor emerita at Purdue University, has noticed an uptick in gendered baby clothing in recent years, and attributes it to the increasing ability of parents to know the sex of their child before birth. “I think because they don’t know anything else about their baby yet, they don’t know the baby’s personality, they focus on that,” she told the Daily Dot.

When sex becomes the focal point, stereotypes aren’t far behind. Dressing a young boy in a “stud” T-shirt is “trying to anticipate what this child is going to be, and then they add all the stereotypes and overlay of social expectations for a girl versus a boy,” says Dr. Myers-Walls.

Research shows that children begin to understand gender identity as early as two years of age, when they pick up on stereotypes from those around them. “Many young girls are dressed in ‘pretty’ clothing and treated very delicately. Young boys are often dressed in ‘cute’ clothes that are easy to move around in,” writes Dr. Myers-Walls. “Boys are often encouraged to be active and strong.”

It’s unlikely a baby will recognize what “future hunk” means, but what this explicitly gendered clothing does is create context for how parents and others treat the child. Clothes like this “change how parents react to the children, what they expect them to do,” says Dr. Myers-Walls. “They may limit some of their opportunities that aren’t in that stereotype. They may teach children to respond to things in a sex-stereotyped way.”

It seems near-impossible to have a child and not have at least some expectations or hopes for how they will grow up. But when it comes to young boys, gender stereotyping can be even more extreme than it is for girls.

“Today, few adults would question a girl who would rather play with a soccer ball than with Barbie,” writes Nancy Kalish on Parenting.com. “But the issue isn’t as simple for boys. Because while we may cheer for the young hero of the film Billy Elliot in his struggle to become a ballet dancer, some of us wouldn’t eagerly applaud our own sons if they chose such a traditionally feminine pursuit.”

Dr. Myers-Walls says the cure is to teach parents how to relate to their babies. Because it’s hard. A three-month-old barely has a personality to speak of, so it’s easy to latch on to what little information you have in order to feel a bond with this new person. However, all gendered clothing does (besides look cute sometimes), is signal to strangers your child’s genitalia.

Nobody knows a child’s gender identity until that child grows up and learns it for themselves. So dressing them solely as a “ladies man” (or a “little princess”) sets them up for a limited life. They’ve been presented with a fixed identity to either accept or rebel against, rather than the opportunity to explore all that’s available to them.

If anything, though, please stop with the camo. “I’ve never understood why people put children in camo,” says Dr. Myers-Walls, “when you want to see them crossing the street.”