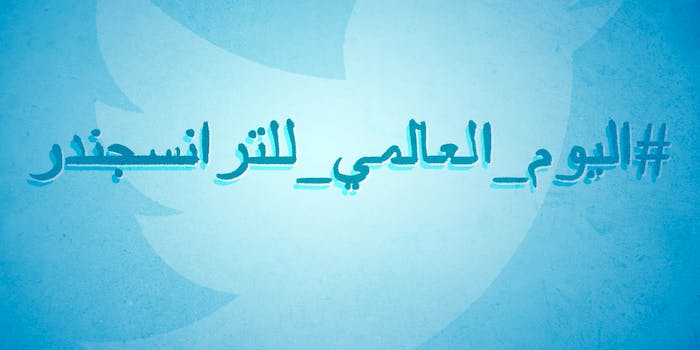 Yes, there are trans people in the Middle East.

Thursday is International Transgender Day of Visibility, and this year, Twitter is emphasizing the international through an Arabic hashtag that proves trans people and their allies are everywhere—even in countries like Saudi Arabia, where coming out can get you killed.

The Daily Dot asked two Arabic speakers to read through some of the tweets with the hashtag that roughly translates to “World Transgender Day.” Suneela Sunbula told the Daily Dot that the majority were positive, mostly focusing on increasing transgender people’s access to doctors and medical care. While others show general dismay over how transgender people are treated in their culture: “We dance crazily to express how we live in a contradictory and crazy society,” one reads. Another says, “They don’t want your love or affection, they just want you to stop hurting them, either with your words or your laws.”

Nadia Taha also read through some of the Arabic tweets for the Daily Dot, and found one that referred to trans people as having a “disease,” albeit sympathetically.

“Any rational person would never stand against an important disease, even if they are not accepting of it,” said NaifTrans on Twitter.

One Twitter user who appeared to be tweeting from Egypt suggested that people learn about trans people from the film The Danish Girl, which was banned in most Middle Eastern countries earlier this year. According to Taha, that tweet translated to “Finally, I suggest watching the film ‘The Danish Girl,’ about the true story of the first trans person, to understand their suffering.”

Some of the tweets using the hashtag were in both Arabic and English. A few expressed fear over posting anything LGBT-oriented, while others made bold statements of pride. Some Twitter users posted photos of themselves—but wore masks to hide their identity.

Transgender Day of Visibility (often shortened to TDOV online) was first launched in 2010 by Rachel Crandall of Transgender Michigan. Crandall wanted to offer a celebratory response to November’s Transgender Day of Remembrance—a day on which vigils are held to mourn members of the community lost to violence.

In 2016, TDOV holds a special significance in the U.S. as an outraged national populace battles an anti-LGBT law in North Carolina that—among other things—mandates trans people use restrooms that match their assigned gender at birth.

But internationally, people from across the LGBT spectrum often face laws like the one being considered in Saudi Arabia. Sunbula said many of the tweets appeared to originate from the Persian Gulf—Saudi Arabia, Iraq, Qatar, Kuwait, and Bahrain—and in all of those countries, with the exception of Bahrain, same-sex sexual activity and gender transitioning are against the law. In countries like Kuwait, additional laws impose imprisonment for “imitating the appearance of a member of the opposite sex.”