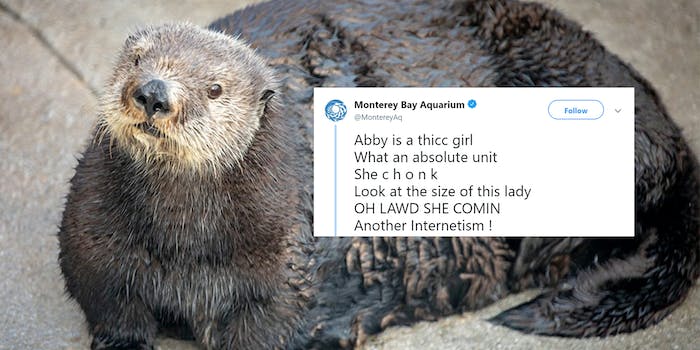 A teachable moment for all.

The latest edition of a cutesy play on wokeness that turned uncomfortable (but then, surprisingly, turned into a teachable moment) was sparked off by a tweet from the Monterey Bay Aquarium.

On Tuesday, the California aquarium shared a photo of an otter using the terms “thicc,” “chonk,” and “oh lawd” to describe it.

Abby is a thicc girl
What an absolute unit
She c h o n k
Look at the size of this lady
OH LAWD SHE COMIN
Another Internetism ! pic.twitter.com/s5fav2gu09

A Twitter user quickly pointed out that a non-Black organization using AAVE, or African American Vernacular English, for laughs was offensive. Especially since words like “thicc” and “chonk,” though intended in a positive manner, are often used to describe Black women’s bodies.

Monterey Bay was swift—and sincere—with its apology, which frankly every other organization that has ever unintentionally offended a population can take a lesson from.

“If our tweet alienated you, please know that we are deeply sorry, and that we offer our sincerest apologies,” the aquarium wrote. “If you follow our feed, we often reference popular memes to talk about the ocean. In this case, the memes used had connotations we were unaware of until now.”

If our tweet alienated you, please know that we are deeply sorry, and that we offer our sincerest apologies. If you follow our feed, we often reference popular memes to talk about the ocean. In this case, the memes used had connotations we were unaware of until now. 2/4

The apology also explained what it had learned about the offense. “In particular, several terms referenced originated from African American Vernacular English (AAVE) and specifically reference Black women’s bodies,” it wrote. “Using them in a sea otter meme without that background makes insinuations we never intended. We need to do better.”

Our mission is to inspire conservation of the ocean, and we're thankful for your support as we try to advance that mission on social media. We're also thankful for those of you out there pointing out our blindspots and how we can improve. Thanks everyone. 4/4

AAVE has its roots in slavery and has since served as a symbol of “African-American resistance to dominant racist and class ideology in our society.” In this here internet age, where memes and slang are currency, digital blackface and the appropriation of Black vernacular are often debated.

However, on Twitter, not everyone minded that the aquarium had adopted Black slang. People poured in with their support for the original tweet, saying it wasn’t racist.

ok i guess but this otter IS thicccccc

Regardless, in a year where the offenses are many, it’s nice when we can all learn from well-intended missteps. Then return to staring at otters.