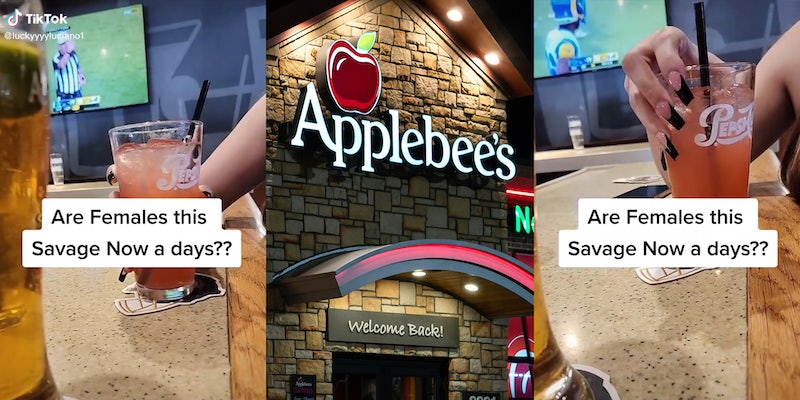 ‘How much money do you make?’: Woman shames man for taking her to Applebee’s on first date

'Never again are you going to take me again. Applebee’s is not acceptable.'

A man on TikTok filmed an interaction he had during a date, on which the woman appears to shame him for choosing Applebee’s as a date location.

“How much money do you make?” asks the woman at the beginning of the video. “I don’t want to seem interested in money and stuff, but I just want to come out from the get-go and tell you, like, … I’m not a gold digger or anything, but I just don’t go out with broke boys.”

“I know you just took me to Applebee’s. I get it, maybe you don’t want to take me to the most fanciest place, like, on the first date, but never again are you going to take me again,” she continues. “Applebee’s is not acceptable.”

“Are Females this Savage Now a days??” user @luckyyyyluciano1 asked in the text overlaying the video.

The TikTok currently has over 3.7 million views.

In the comments section, viewers said if they were asked such a series of questions, the date would not have lasted for much longer.

“Damn the thought of leaving her stuck with the bill has never crossed my mind so fast…..” wrote one user.

“I would’ve went to the restroom and dipped lmao,” agreed another.

“I would’ve told the waiter to split the check pls,” offered a third.

Apparently, the woman in the video saw the original TikTok and texted @luckyyyyluciano1.

“It’s not my fault all those broke guys are mad in the comments…and those girls that are happy with a $5 burger,” she wrote.

Commenters continued to side with @luckyyyyluciano1.

“When I met my husband he didn’t have 2 pennies to rub together,” recalled a user. “Now we have several cars, a house & in the process of raising the last of 5 kids.”

The Daily Dot reached out to @luckyyyyluciano1 via TikTok comment.