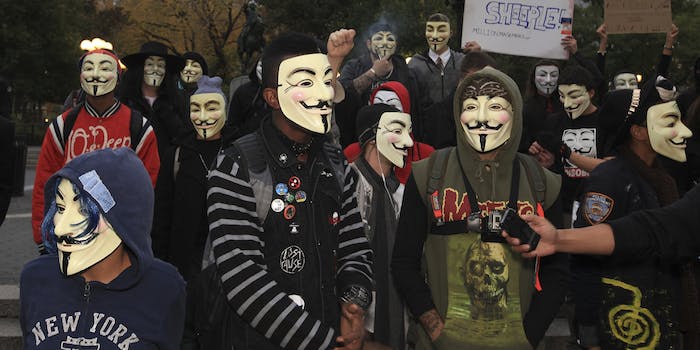 Photo via a katz / Shutterstock.com

There were 53 arrests during the Million Mask March this weekend.

The news website of London’s Metropolitan police experienced a 12-hour shutdown during Saturday’s Million Mask March as hacktivists at home responded in revenge for arrests happening on the ground in London.

Unions and activist groups had been demonstrating throughout the capital city  over a host of social and political issues, from Brexit to solidarity parades for protesters of the Dakota Access Pipeline at the U.S Embassy. In culmination of the day’s protest events, thousands of protesters had gathered for the Million Mask March in Trafalgar Square wearing their Guy Fawkes masks.

Nov. 5 has become one of the U.K.’s biggest days of protest, subverting a traditional cultural celebration that commemorated the failure of an assassination plot by Guy Fawkes and his co-conspirators in 1605. Their aim, then, was to blow up King James and the Parliament buildings by loading the basement with gunpowder. Fawkes was captured along with the other plotters and publicly executed.

While traditionally the villain of this English national holiday, Fawkes is now an anti-establishment icon. Now, every year, central London hosts the Anonymous-inspired march through the city to the buildings that he’d failed to destroy.

Following violent exchanges in which officers and protestors were injured the previous year, the police had already promised to enforce strict conditions on the march. But tensions began to escalate as police, armed with batons and shields, attempted to maintain a tight perimeter around members of the crowd as they arrived at the governmental buildings.

Amid chants of “fuck the police” and “police brutality,” altercations began between the riot police and some pockets of protestors, and law enforcement media streams reported on arrests as they happened.

As of 10:45 pm there has been a total of 47 arrests for various offences. #millionmaskmarch #london #mmm2016

The police force’s public news website was then, suddenly, taken down in what appeared to be a distributed denial-of-service (DDoS) attack.

The Met Police site was down for 12 hours in an apparent DDoS.

Responsibility was quickly taken by one hacker on Twitter who claimed to be operating under Anonymous’ sub-faction AntiSec:

By the end of the night, 53 people had been arrested, and the police’s website remained offline until 7am on Sunday.

In a statement to the Daily Dot today, a police spokesperson refused to comment on the specifics surrounding the attack. Calling it a “temporary issue” and a “disruption,” the officer was clear to affirm that the “website is now working fine” and that “there are no security issues with the Metropolitan Police Service website.”

It’s understood, however, that the Metropolitan police are in fact investigating the cyberattack.