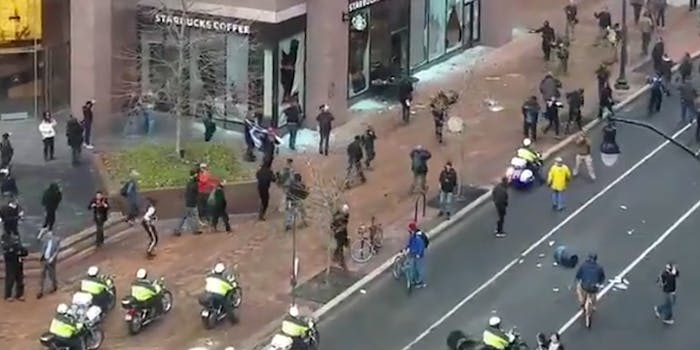 More than 95 protesters arrested amid violence.

Violent protests erupted today in the streets of Washington, D.C., as President Donald Trump was sworn into office. Nearly 100 rioters were arrested after tense face-offs with police.

The bulk of the protests were reportedly peaceful up until about 1 pm ET. Inauguration protesters started early Friday morning by blocking several entrances into the ceremony. Shortly after Trump was officially declared president, things turned ugly. Several-hundred protesters began marching through the streets while some began breaking windows, burning trash cans, and destroying businesses throughout the downtown area.

Washington Post editor Dan Eggan captured this scene outside of his office.

It's the new dumpster fire pic.twitter.com/stB9NS0q4q

One Starbucks and a Bank of America were both victims of the violence.

Protesters smashed windows of a Starbucks and Bank of America in Washington, DC, during Pres. Trump's inauguration https://t.co/1y4sqXWCep pic.twitter.com/iupe72TeNt

14th and K, 10:52 am: looks like some people get pretty cranky without their caffeine … pic.twitter.com/7hEV9EKGko

Police responded with tear gas, pepper spray, and water hoses, in addition to driving one of their vans into a large crowd.

CNN reported that two police officers and a handful of protesters were transported to the hospital. Pro- and anti-Trump protesters likewise clashed in downtown D.C., though only verbally.

Anti-Trump protests are popping up around the nation today as Trump makes his way into the White House. Demonstrations have also been reported in Hong Kong, London, and Berlin.