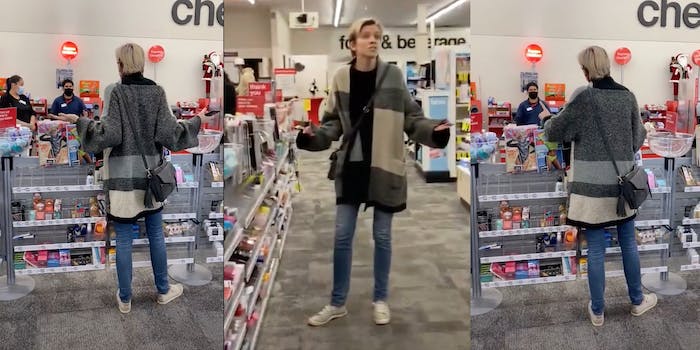 The woman claims she is 'entitled to service.'

A healthcare worker attempted to reason with an outraged anti-masker in California in a video that has since gone viral.

The footage, captured by Twitter user Ty Stiklorious on Saturday, shows the woman refusing to wear a mask inside a CVS in Los Angeles.

“My son & I were at CVS in Los Angeles, the epicenter of the virus where 1 person is dying every 10 mins from COVID-19 & this woman was refusing to wear a mask & arguing with everyone,” said Stiklorius. “The selfishness she exhibited was intense. It blew our minds. My 10-yr-old has more sense.”

The unknown woman can be heard arguing with employees at the pharmacy that she should be exempt from wearing a mask.

“Doesn’t it occur to anyone that this doesn’t make any sense?” the woman says. “That healthy people should be treated like they’re sick?”

When asked by one employee to simply follow the rules like everyone else, the woman again insists that she shouldn’t have to follow either the store’s policies or the state mandate.

“Why would I follow the nonsensical rule?” she asks. “Why would I be treated like a sick person?”

The woman goes on to claim that she is also “entitled to service” despite declining to abide by the company’s policies.

When the employees claim that they can in fact deny her service as a private business, the woman alleges to have a health condition that bars CVS from denying her service.

In a second video, however, the woman is confronted by a healthcare worker who attempts to explain the seriousness of the pandemic.

The healthcare worker attempts to explain how hospitals are overwhelmed with coronavirus patients and disputes the claim that COVID-19 is no different than the flu.

“There’s like 36 people with COVID in the ICU. Whenever there’s a flu, there’s only two or three patients at a time in the ICU,” the healthcare worker explains. “Literally the entire hospital is COVID cases. This has never happened.”

The woman again responds by asserting that only those who are sick should have to wear a mask before spreading numerous falsehoods about the disease.

After falsely claiming that asymptotic spread is a “myth,” the woman spouts off numerous other false claims popular among conspiracy theorists online.

“This is not what they are telling us it is,” the woman says. “This is a lie.”

The outraged woman explains that she reached a “breaking point” that evening and vowed to push back against social distancing guidelines.

“It will go on and on and on as long as they feed us this lie and we comply with it, and I am done,” the woman says. “Tonight, I reached a breaking point.”

The woman also makes a point to stress that she is definitely not “crazy” either after an older woman approaches and offers her a mask.

“I’m a healthy person. I’m not crazy,” she says. “This is like psychosis for everyone to put all this stuff on their face when they’re healthy.”

The older woman replies by alleging to be an undercover officer with the Los Angeles Police Department (LAPD) before threatening to call the police.

“Go ahead!” the anti-mask woman says. “They cant arrest me because there’s no laws.”

Even Stiklorious attempts to reason with the woman while filming, but has about as much success as the others.

It remains unclear whether the woman left on her own accord or whether police were eventually called.