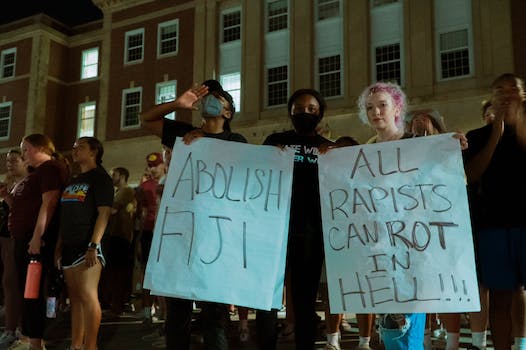 ‘How is this BS still allowed?’: Sexual assault protests burgeon into an anti-Greek life movement online

Students protested for days after an alleged sexual assault at a frat house.

Last week, sophomore University of Nebraska-Lincoln student Will Green went from being what he described as “just a typical teenager on TikTok” to the catalyst of a viral spotlight on protests against a local fraternity and Greek life at large.

On Aug. 24, Green posted a video of hundreds of students chanting “rot in hell” in front of the house belonging to the local chapter of Phi Gamma Delta, aka Fiji. Green’s video was taken less than 24 hours after a rape was reported to have taken place at 3:47am at the Fiji house.

The video received 30,000 likes overnight. On Wednesday, it had been viewed 2.1 million times and sparked condemnation of Greek life and rape culture on TikTok. The movement revealed more details about the alleged assault at Fiji, bonded college students across the country fighting for the same cause, and gave some survivors hope that sexual assault will no longer be swept under the rug on college campuses.

In a phone interview with the Daily Dot, Green said he posted the video on TikTok because the app is “the kind of place where videos are most likely to go viral,” and he wanted people to see the protests.

A TikTok posted on Aug. 25 by Lauren Patton, another sophomore at the University of Nebraska-Lincoln, details the severity of the alleged assault on the student, who many are saying is a freshman. Patton’s video has 1.8 million views.

“My roommate just got home because on her walk back around 3 she saw a girl sobbing in the green space and she had been raped at Fiji,” begins a testimony that Patton screenshot from a social media post with specific names of students crossed out. “[She] literally had to be taken to the hospital for a rape kit. The girl was a virgin and has bruises and scratches all over her. She also had some of the worst tearing and bleeding in her vagina the nurse had seen.”

Patton told the Daily Dot in an email that the screenshot image spread quickly across campus, and Green said that news and details about the student-run protests “spread like wildfire” over text and on social media.

The protests have continued for multiple nights after the assault and only grew in numbers.

“But even that first turnout was a lot more than people had anticipated,” said Green, who also noted that students were committed to making sure there was a spotlight on the university as it responded to the assault.

The admin of @shutdownfiji, an Instagram account that now has over 31,000 followers, had that same goal in mind. (BuzzFeed News identified the admin as sophomore Rose Felice.)

“When the account started collecting followers at such a quick pace I realized it would be a great platform for people to know about what has been going on behind the scenes and has been purposely hidden by admin for years at UNL’s campus and institutions across the U.S.,” Felice told the Daily Dot via Instagram direct message.

In a statement shared with the Daily Dot, Chancellor Ronnie Green (no relation to Will Green) said the University of Nebraska-Lincoln Police Department was investigating the allegation of sexual assault at the Fiji house.

“The Phi Gamma Delta (Fiji) fraternity at UNL is currently under probation for previous violations of university policy,” the statement said. “We are closing the fraternity house and suspending operations of the Fiji chapter while this investigation is ongoing, due to potential violations of that probation. This is the responsible action to take for everyone involved.”

The chancellor also pointed to a sexual assault misconduct prevention and response training that’s mandatory for students, faculty, and staff and the university’s list of emergency and mental health resources.

Felice also started the Change.org petition “Ban FIJI Forever (UNL),” which by Wednesday had over 400,000 signatures and alleges that 13 female students have been raped at the Fiji fraternity house on the University of Nebraska-Lincoln campus.

Green said that there’s an understanding on campus that Fiji is the “epitome of toxic masculinity”: The fraternity’s UNL chapter was suspended in 2017 after members harassed attendees of the Women’s March in January of that same year. Fiji’s suspension was lifted in 2019, according to the Daily Nebraskan, a student-run newspaper.

In a statement via email to the Daily Dot, Rob Caudill, the executive director of Phi Gamma Delta said that the International Fraternity “does not tolerate sexual violence.”

“Our chapter at the University of Nebraska is cooperating with local authorities as they investigate allegations of sexual assault by one of its members,” Caudill continued. “The International Fraternity is working with the University and will take appropriate action pending the findings of the investigation.”

While protesters seem to agree that Fiji should be banned from the University of Nebraska-Lincoln campus, Green said that there’s a significant split between protesters who want to eradicate Greek life entirely because of its ties to rape culture and those who don’t think Greek life should be abolished even though they are protesting against Fiji.

Online, many are posting about abolishing Greek life as a whole.

“People wonder why the Abolish Greek Life movement is a thing,” tweeted @aewall14, “yet around the nation, there are chapters just like UNL FIJI getting away with disgusting and heartbreaking actions without the blink of an eye.” The user has not identified herself as a UNL student.

“How is this BS still allowed on our campus?” tweeted @AnaSofiaaa23, who says she’s a University of Texas student in her Twitter bio. “Abolish Greek Life, [Jesus fucking Christ]”

Others expressed similar criticism in the comments of Green’s TikToks alongside messages of support from survivors of sexual assault.

“Abolish it,” commented @burnfawn. “When I was a freshman I got kicked out of my sorority because they said I lied about being sexually assaulted.”

“I wish I had people rallying in the streets for me but I am also so happy the survivor has people rallying around the world for her,” commented Bailey Opdahl. In an email to the Daily Dot, Opdahl told the Daily Dot they are a “multiple sexual assault survivor” and that the Abolish Greek Life movement is a “pivotal moment in sexual assault culture.”

“The tides are changing,” they said. “Gen Z, Millenials, and sexual assault survivors will not allow misogynistic rape culture to continue.”

Opdahl said they were overwhelmed with emotion when they first saw the videos of the protests at UNL on their For You Page but that their lasting feeling has been pride for the generations of students “letting the members of Fiji know it ends here.”

“To the people enforcing the antiquated laws, just remember you won’t be in charge forever,” Opdahl told the Daily Dot. “And these generations are coming for your seats.”