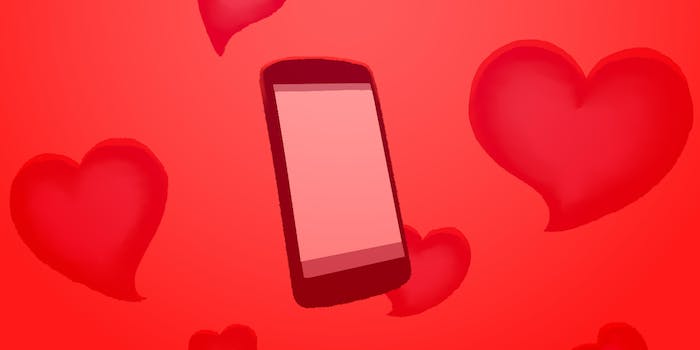 The secret to creating a creep-free dating app

But even app inventors agree it's not that simple.

It’s no secret that online dating (well, all dating) can be hard for everyone, but there are specific problems for women seeking men. Trying to find happiness and compatibility in a partner is hard enough, much less doing it without some jerk sending you dick pics or negging you until you block him.

Indeed, a Pew study from 2013 found 42 percent of women have been contacted on a dating app in a way that made them feel uncomfortable or harassed. That is why some dating apps and services are now making a very appealing—but dubious—claim of being “creep-free.”

When the Daily Dot interviewed Lauren Urasek, the most popular heterosexual woman on OkCupid, she revealed she had signed a partnership with a new dating app, The Grade. “It essentially is the only app that will expel users if they’re being inappropriate or something,” she said. The Grade, whose slogan is #NoMoreCreeps, attempts to keep randos at bay by allowing peer reviews with your “grade” reflecting everything from quality profile pictures to previous interactions. In other words, misbehave and your grade will go down. This feature is what makes the app “female-friendly,” according to its creators.

The Grade isn’t the only app promising they can banish boors with technology. Recently, dating site Jess, Meet Ken released a new app that relies on women to vouch for other men who sign up: “He may not be right for you but he could be GREAT for someone else! A dating app for women to introduce men to other women.”

According to Ken Deckinger of Jess, Meet Ken, there are two benefits to having women vouch for men. First, it creates accountability: Women don’t want to nominate someone they don’t think well of, and men, ideally, don’t want to disappoint the friend who nominated them. This pre-screening also makes men better candidates in the eyes of other women. A woman vouching for a man will bring out “attributes that otherwise might not be obvious if he were to present himself.” This seems to work well for women vouching for men, but Deckinger is unsure if it would work were the situation flipped: “I’m not sure that women would trust a guy’s endorsement as much.”

Other services that attempt to weed out the undesirables include Hinge, an app that introduces you to friends of friends; Coffee Meets Bagel; which matches you with only one person per day; Bumble, where men aren’t allowed to message first; and Grouper, which sets up group dates between friends. The common thread is that these apps give a user, and specifically a woman looking for a man, a support group. She can bring her friend along, or see that other women like this guy, or just doesn’t have to sort through thousands of “ur hot” messages sent at 2am.

By putting women in control, these apps hope to make it clear to women that their safety and comfort is important, and to men that, if anything else, women just don’t like it when you creep on them. So far, it seems to be working—to a point.

“The norm in heterosexual context is for men to make the approach,” Dylan Selterman of Science of Relationships told the Daily Dot. “And that’s not ideal because you’re basically ceding all the power to men.” According to Selterman, research shows that more egalitarian setups result in happier relationships, whether they met online or offline. “So anything that gives more power to women, especially in terms of making the initial approach and giving them more control over the situation, is going to be very beneficial,” he explained.

What these apps highlight is a growing recognition in the dangers women face when dating men, and how technology can both help and fuel those dangers.

What these apps highlight is a growing recognition in the dangers women face when dating men, and how technology can both help and fuel those dangers. On one hand, interactions online are more impersonal. Rather than having a creepy or untrustworthy person approach you in public, the interaction is a message in an inbox, which you can easily ignore or delete if it’s unpleasant.

On the other, anonymity and abundance give aggressors more freedom to abuse. “There are also so many people to meet, creating the feeling that being offensive to one person, and getting shot down, doesn’t matter because there are thousands of other people to meet next,” says Deckinger.

It’s important to remember that Cupid only recently began writing code. “I don’t think the people who developed the apps were even aware of this danger before they came into existence,” said Selterman. “And now that this problem has been identified, these developers are thinking about ways to deal with it.”

Really though, there is only so far technology—such as “gentleman pledges” required by the app Dapper—can go. The root of the problem is in learned behaviors, not the means through which they are expressed. If men are raised thinking that they are entitled to a woman’s attention, that making gross comments about a woman’s body is the right way to attract her, and that rejection merits abuse, it doesn’t matter where they go about acting on these opinions. In other words, no dating app can truly turn a creep into a gentleman. “Unless people feel accountable for their behavior on dating apps, creepy behavior will persist,” said Deckinger.

Thus, in order for “creep-free” dating apps to actually work, we need to teach the men using them not to creep in the first place. “Everyone would benefit in the dating world if we put more effort into teaching young people about psychology and how relationships work, about what are acceptable and unacceptable behaviors,” said Selterman. That might take a little more than an app to accomplish.