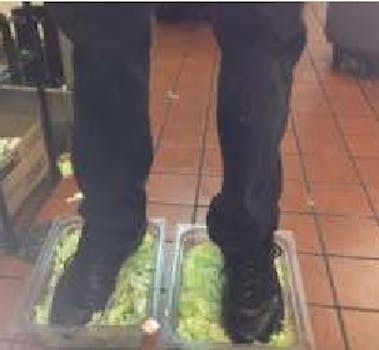 Have it your way—assuming you like it when employees step on your lettuce and post the evidence to 4chan.

Worldwide hacktivist collective Anonymous will expose Mexican drug cartels and out pedophiles on Twitter. It will also apparently help bring justice to the Burger King employee who stands in the lettuce container.

Last week, Anonymous members picked up on a since-deleted 4chan post featuring a photograph of a fast food employee standing with his feet in two exposed lettuce containers.

Outraged the collective sprung into action, using the GPS data embedded in the post’s Imgur data to figure out that the photo was taken and posted at a Burger King on Cleveland’s Mayfield Road. Anonymous then found the store’s exact location and logged a complaint through Burger King’s Tell Us About Us forum.

At 12:18am ET, one Anonymous member, identified as wtisdcBX, recounted a conversation had with the store’s evening manager.

According to the post, the manager said that he would “find out who closed up last week, because they’re gonna have hell to pay.”

“I don’t know what kind of game these kids are playing,” he continued. “But it’s sick and pathetic.”

That’s when the Anon offered to send along the picture.

The Mayfield Road Burger King’s phone has been busy for the past hour, but the Vince Grzegorek of the Cleveland Scene was able to get in touch with Andrea, the shop’s breakfast shift manager, this morning:

When Scene directed her toward the snapshot, she quickly said: ‘Oh, I know who that is. He’s getting fired.’”

“We are aware of the photo that was allegedly posted by an employee at a Burger King restaurant in Ohio and are taking the issue very seriously,” he said.

“Food safety is a top priority for Burger King restaurants and the company has strict policies regarding its food handling procedures. We are investigating the matter and will take appropriate action as necessary.”

Appropriate action in this case should surely lead to a firing. We at the Daily Dot are also hoping it leads to a temporary decrease in the cost of a Whopper Jr.