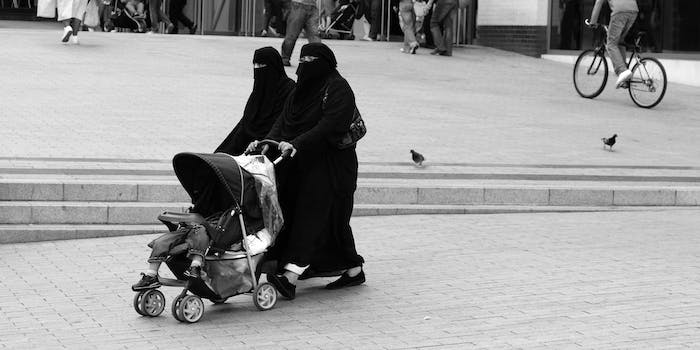 Angela Merkel said the full-face veil is 'not appropriate' in German society.

German Chancellor Angela Merkel has come out against women wearing burqas and niqabs in Germany, saying “the full-face veil is not appropriate” and that it should be outlawed “wherever that is legally possible.” The statements, which were made at a Christian Democratic Union conference, were met with applause.

Merkel said she would be in favor of a nationwide ban on veils covering the face. She also said that last year’s mass immigration of refugees “must never be repeated.” Germany accepted nearly one million refugees in 2015, with one in three asylum applications coming from Syria.

Merkel’s comments appear to contrast her position just earlier this year, in which she openly welcomed refugees in the face of criticism. However, her interior minister proposed a burqa ban in August. And now many are saying Merkel’s turn-around is a ploy to win support for her fourth run for German chancellor, as anti-immigrant sentiment has risen with the influx of refugees.

Many are outraged at Merkel’s statements, though, saying they’re just another way of legislating women’s bodies and discriminating against Muslims.

Angela Merkel calls for burqa ban 'wherever legally possible' in Germany. She has no right to decide what women decide to wear #Islamophobia

“Angela Merkel has called for a burqa ban in Germany.”

Sigh. Telling women what (not) to wear is not liberation. https://t.co/6ZbmC7ssIh

The legislation of what women can and cannot wear has been a recent battle in Europe. This summer, a number of French towns banned “burkinis” at the beach, which resulted in one woman being forced to strip in public. The European Court of Human Rights ruled that France’s burqa ban is not discriminatory. The lower house of Dutch parliament also recently voted to ban burqas in some public spaces.

Many of these bans are put in place under the guise of secular freedom and gender equality, saying that women should not be forced to cover themselves up, and that there is no place for overt religious dress in public. And yet, nobody is legislating nuns’ habits.