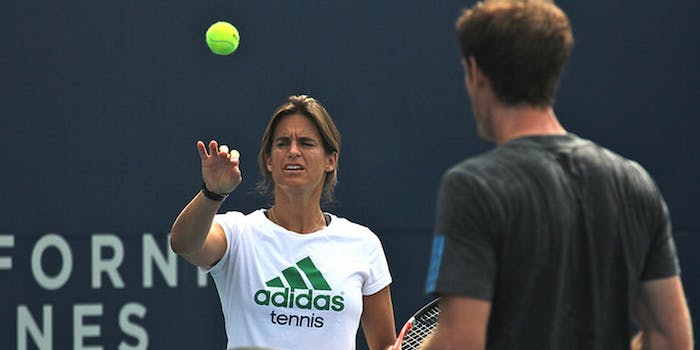 Having a female coach has changed the tennis star's perspective on gender relations.

Ever since tennis star Andy Murray hired coach Amelie Mauresmo after parting ways with Ivan Lendl, Murray has witnessed how male coaches are treated differently than their female counterparts.

There’s little doubt that Lendl helped Murray reach a different level of tennis—he conquered his dream of winning Wimbledon with Lendl’s help, along with an Olympic gold medal and a U.S. Open title — but it’s also interesting that Murray actually has a better win-loss record in his first year under the tutelage of Mauresmo, formerly the No. 1 women’s player in the world.

In preparation for his French Open semifinals match against world No. 1 Novak Djokovic on Friday, Murray said that Mauresmo has indirectly taught him something else, something more than how to improve his tennis. What she’s taught him is that he’s a feminist.

“Have I become a feminist? Well, if being a feminist is about fighting so that a woman is treated like a man, then yes, I suppose I have,” Murray wrote on AndyMurray.com. “My upbringing means that I’m quite attuned to the whole thing. I came to tennis thanks to my mother. I always had a very close relationship with my grandmothers. I’ve always been surrounded by women.”

She’s helped him in other ways, as well.

But Murray has also noticed that if he plays poorly, Mauresmo is the one who gets the blame.

“Her competence was always under fire. I felt embarrassed,” Murray wrote. “That’s why I made a point of repeatedly saying she was doing an excellent job. The real low point hit at the Masters when I lost 6-0, 6-1 against Roger (Federer, in London). Rather than blaming me, they pointed the finger at Amélie. I still remember what some players and coaches said about her — I wasn’t impressed and I shan’t forget in a hurry…”

Murray hasn’t beaten Djokovic in his last seven tries. But Murray is 15-0 during this year’s clay-court season thus far, and although he’s never made a French Open final, beating Djokovic certainly would be an impressive victory—for him and his coach.

“I find it easier to talk to [women],” Murray said. “I find it easier to open up to them. It’s a crying shame there aren’t more female coaches. I hope this changes even if this isn’t the reason I chose Amélie. Whilst a female coach might not gel so well with others, it wouldn’t hurt for everyone to be a little more open-minded.”