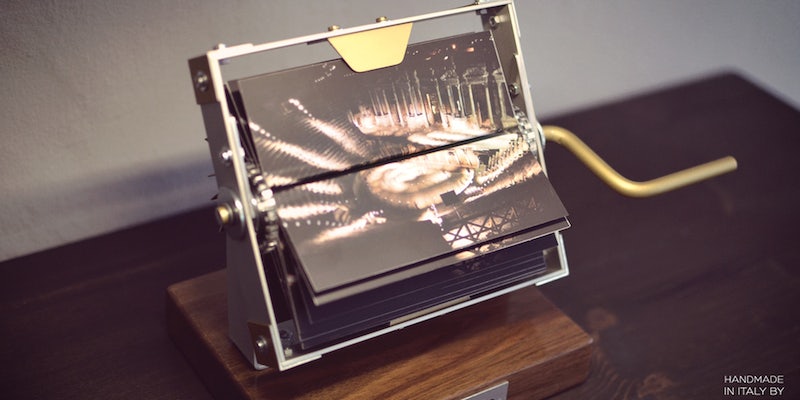 Handcrafted analog GIF display is as hipster as it gets

"Back in my day," you'll say, "we had to hand-crank our GIFs, uphill both ways, barefoot and backwards, in three feet of snow."

If you enjoy animated GIFs but just don’t think they’re quite artisanal enough, then you’re in luck. An Italian company named OKKULT Motion Pictures has begun producing a line of machines known as “Giphoscopes,” or analog GIF players.

The Giphoscope is based on a 19th century device known as a Mutoscope, which operates on the same principle as a flipbook and was often found at arcades and fairgrounds. Handcrafted from aluminum and walnut, it certainly classes up the GIF genre as a whole. And we begrudgingly concede that’s probably why they decided to use Turkish GIF artist Erdal Inci as the example on their website, rather than, say, a cat getting stuck in a box over and over again.

To give you an idea of what the original looked like, here’s the Erdal Inci’s GIF in its original format, sans Giphoscope.

In an email to the Daily Dot, one of Giphoscope’s creators said that most orders so far have been from “VIPs from New York,” more or less confirming our suspicions that the Giphoscope is (dare we even say it) something of a hipster product.

The idea of beautifully handcrafted analog GIF-player is delightfully retrofuturistic, although with prices starting at $400 (€299) per machine, we’re probably not going to be investing in one just yet.