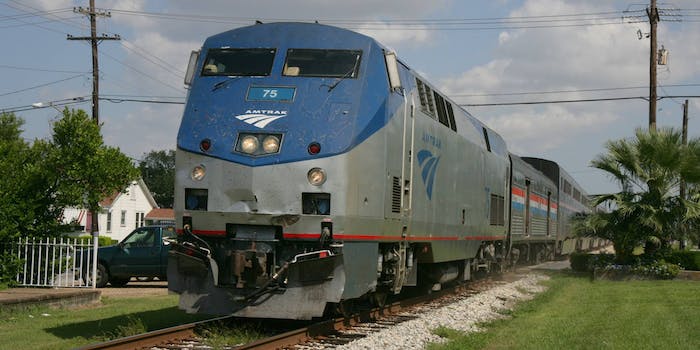 Why are 22 of the 24 new Amtrak writing residents white?

Amtrak says it's 'diverse representation,' but others aren't so sure.

In 2014, Amtrak launched a residency program to let selected members of the literary community “work on writing projects of their choice in the unique workspace of a long-distance train” at no cost.

This year, a majority of those selected members are white, and many creatives aren’t happy about it.

Amtrak writes that “the residents offer a diverse representation of the writing community and hail from across the country.” There certainly is some representation of different backgrounds—lots of women, some LGBT writers, and some disabled writers, too. However, 22 of the 24 selected are white, and there is not a single black writer.

On social media, people are pointing out this isn’t a diverse representation at all.

Remember the #AmtrakResidency we were all excited about? @Amtrak chose 24 writers. 22 are white. Not one is black. https://t.co/JhDN93SPBo

It's great to see older people and trans folk included in this list, but yes, still needs work in terms of inclusivity.

.@aurabogado @Amtrak The lack of Black writers isn't only disrespectful, but ahistorical: railroads are integral to Black history&experience

Hey @Amtrak not a single Black person among the writers chosen for your #AmtrakResidency Please explain.

“Gender, race, or sexual orientation weren’t part of the application process,” said Kimberly Woods, of Amtrak media relations, in an email to the Daily Dot. “We received more than 600 applications. Finalists were chosen by a panel of judges based on the quality and completeness of their application package.”

Residency judge Jeffrey Stanley provided the Daily Dot with a little more insight into the process. “Indeed, when I saw the photos of the winners yesterday for the first time, when they were announced, my heart sank,” he told the Daily Dot over Twitter DM. “As you’ve said, it’s diverse in so many other ways, but there are no black faces. Obviously, this wasn’t done intentionally.”

Stanley said the judges were not provided with information on applicants’ ethnicity or appearance unless it was stated in their bio or came up in writing samples they provided. “Should the application be modified for future applicants and judges instructed more specifically to weigh race in the application process? Maybe so. These are issues faced by every theater organization with which I’ve been involved as a board member, every screenwriting contest I’ve ever judged, any college admission portfolio I’ve been asked to evaluate.”

It could also be argued that a vast majority of applicants were white to begin with—and it’s important to ask why that could be. People of color are subject to discrimination when it comes to education, housing, career tracks, and more, which leads to a bottleneck effect where fewer people are afforded opportunities to become experts in their fields.

Perhaps there were plenty of talented writers of color who didn’t have the time, knowledge, connections, or confidence to apply for the residency, and thus, in search of the “best” applicants, the results are overwhelmingly white. But true diversity takes effort. Maybe that effort will be made next year.