American Apparel has a history of pushing the envelope with its sexually provocative (some would say “pervy“) ad campaigns. Now, the company is once again causing controversy after a UK ad regulatory agency banned one of its ads, on the grounds that the ad could be interpreted as sexualizing an underage girl.

The latest ad is for a thong bodysuit, modeled by a woman whose “youthful appearance” caused problems with the UK’s Advertising Standards Authority (ASA).

American Apparel claims the model is 20 years old, but the ASA decided that some consumers might think she is underage. Since one of the photos on American Apparel’s website shows her with her buttocks exposed, the ASA felt that the ad “could be seen to sexualize a child.” 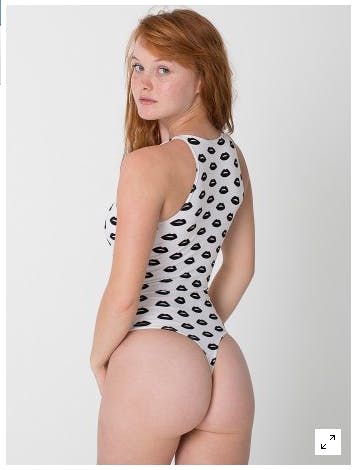 As Business Insider points out, several other American Apparel ads have been banned in the past for similar reasons. Last year, the company was heavily criticized for featuring a provocative upskirt photo on its website, which Jezebel referred to as “gross and sexist.”

In this case, the model doesn’t look underage, so much as it looks like she’s not wearing a ton of makeup, a look that’s common in American Apparel’s faux-natural photo shoots. American Apparel ads might be creepy, but banning one vaguely titillating photo of a model’s butt cheeks probably won’t make much of a difference—especially since the brand has been ignoring this kind of criticism for years.