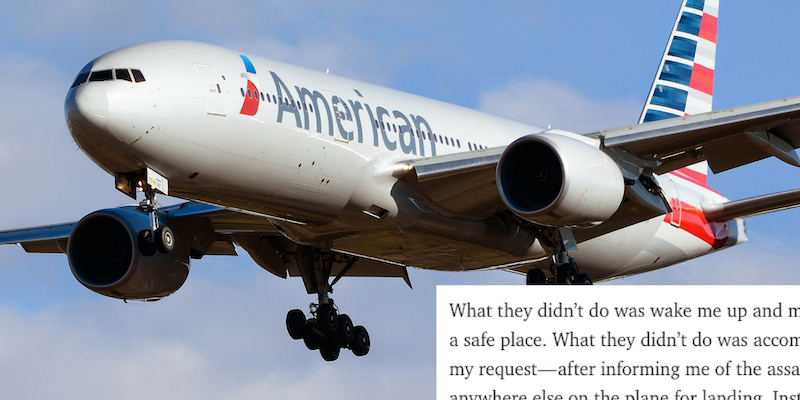 The sad reality is, she's far from alone.

Sexual harassment and assault are traumatic in any circumstance, but for one American Airlines passenger, the pain has transcended into how the airline and the attendants on her flight have addressed the situation.

Though the woman on the other side of him noticed what he was doing and asked to be moved, King said the flight attendants didn’t wake her up, allowing her to sleep there while he continued. And while they had notified the French Police so he could be arrested upon landing, they didn’t allow King to move to a different seat.

“What they didn’t do was wake me up and move me to a safe place. What they didn’t do was accommodate my request—after informing me of the assault—to sit anywhere else on the plane for landing,” King wrote. “Instead, they made me climb back over the sex offender, trapped between him and the window for the rest of the flight. I was shaking and crying and trying not to get sick.”

While she immediately filed a complaint with both airline personnel and American’s legal team, she received little to no response.

“I’ll never know what exactly happened on that flight, but I do know I’ll never feel completely safe flying again. Add an American Airlines airplane to the long list of places where, as a woman, I will feel anxious and vulnerable,” she continued.

The airline has since replied to the claim, stating that it’s currently reviewing the situation and that it has reached out to King.

For King and many other women, that means staying on edge throughout an already cumbersome travel experience, one that King would rather forgo by avoiding American Airlines altogether.

“[American Airlines] chose to treat the man committing the crime with far more respect than the unconscious woman sitting beside him,” she wrote. “As humans, we deserve more than that.”