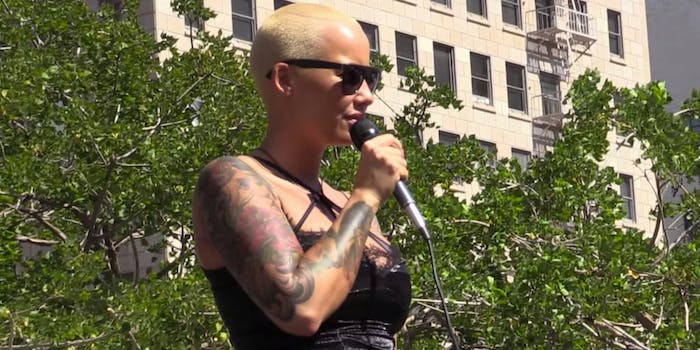 Amber Rose keeps on walking at the L.A. SlutWalk

On Saturday, the Amber Rose-led SlutWalk took place in downtown Los Angeles, as thousands walked the streets with signs addressing victim-blaming, rape culture, and domestic violence. Participants were encouraged to collectively flood the feed and get the event trending online.

SlutWalk initially started in Toronto in 2011, and has since taken place in cities like Chicago and Portland, Oregon. But Rose is perhaps the biggest name attached to one so far.

She’s been making this her cause for a while: At the Video Music Awards in August, Rose wore a custom-made bodysuit printed with insults she’s received online. Last month, she partnered with Funny or Die for a twist on the “walk of shame.” And she’s used social media to push back against trolls.

Social media was indeed flooded with images of the celebrity-filled event, which, according to the GoFundMe page, was hosted by Rose’s nonprofit, which aimed to provide “on-site services such as HIV testing, sexual awareness booths.”

Rose also gave a speech in which she forgave former boyfriends Kanye West and Wiz Khalifa for disparaging remarks they’ve made about her, and spoke her experience with slut-shaming, which started when she was a teenager.

Screengrab via The Hollywood Fix/YouTube